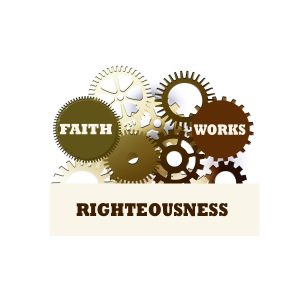 In discussing faith and works with Jehovah’s Witnesses, ask for their help in understanding Paul’s teachings and request that they look with you at Romans 4:1-8.

As you go along, ask them questions that will require them to voice the points Paul is making in the context in which he makes them.

By doing that, you will be modeling sound contextual Bible study.

That will contrast with the Watchtower’s instructional methods, which involve making statements of their beliefs followed by short proof texts or verse citations listed together without accompanying quotes.

Start with a small bite by asking them to read Romans 4:1-2 out loud from their Bibles.

Romans 4:1-2: “That being so, what will we say was gained by Abraham, our forefather according to the flesh? 2 For instance, if Abraham was declared righteous as a result of works, he would have reason to boast, but not with God.”

You are looking for the answer no, that God declared Abraham righteous because of his faith.

Don’t be surprised if they immediately bring up James 2:21, which says that Abraham was declared righteous by works when he offered Isaac on the altar.

If they do, tell them that’s a great point and that you want to discuss that with them also but that right now you’d like to focus on what Paul says in Romans 4 to make sure you understand what Paul is trying to get across. Then you’ll be happy to look at James because you know God’s Word doesn’t contradict itself.

Have them go on to read aloud Romans 4:3.

Romans 4:3: “For what does the scripture say? ‘Abraham put faith in Jehovah, and it was counted to him as righteousness.’”

This verse says that God declared Abraham righteous because of his faith.

Ask, “When did that happen? What exactly did Abraham have faith in?”

Their chain reference directs them to Genesis 15, where then childless Abraham believed God’s promise that he would have a son as an heir.

Listen to their explanation.

This introductory passage will set the stage for the heart of Paul’s teaching, which is contained in Romans 4:4-5.