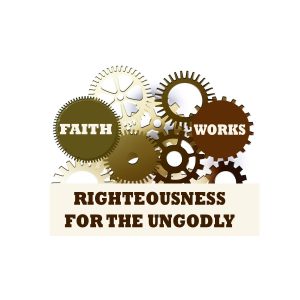 Romans 4:-4-5 contains the heart of Paul’s teaching about faith and works.

Here’s how I recommend you discuss that passage with Jehovah’s Witnesses.

Ask one of the Witnesses to read those two verses aloud from their New World Translation.

Romans 4:4-5: “Now to the man who works, his pay is not counted as an undeserved kindness but as something owed to him. 5 On the other hand, to the man who does not work but puts faith in the One who declares the ungodly one righteous, his faith is counted as righteousness.”

Ask them to tell you in their own words what that passage is teaching.

By listening to their response, you’ll find out how much they did and didn’t understand.

It’s likely that they’ll miss a lot because what Paul says doesn’t match Watchtower doctrine at all.

Because of that, you’ll probably need to ask specific questions to get them to engage with what the Bible is really teaching.

Ask, “What point is Paul making about the difference between the man who works (verse 4) and the man who does not work (verse 5)?”

The answer you are looking for is that the man who obtains something by his works isn’t receiving a gift. He is entitled to what he receives; they are wages he has earned.

Then ask, “With regard to verse 5, does the man who doesn’t work end up being declared unrighteous or righteous?”

Ask, “In verse 5, who is the one who declares the ungodly man righteous?”

You are looking for them to say “Jehovah.”

Ask, “Why would Jehovah declare an ungodly man—a man who doesn’t work—righteous?”

You are looking for them to say that it’s because of his faith.

Ask, “Do I understand this correctly, then—Paul teaches that this man doesn’t work and he’s ungodly, but Jehovah declares him righteous because of his faith?”

Ask, “If Jehovah has declared him righteous, is he truly righteous or is he unrighteous?”

Establish that such a man is righteous even though he has not yet produced any good works to prove it.

Most likely, these conclusions will make them very uncomfortable.

Expect them to try to hopscotch you to James.

They may cite you James 2:21: “Was not Abraham our father declared righteous by works after he offered up Isaac his son on the altar?”

Or perhaps they will quote you James 2:24: “So you see that a man is to be declared righteous by works and not by faith alone.”

If so, tell them politely, “I’ll be glad to look at what James says a little later but right now I want to focus on what Paul is saying because it’s Paul I’m trying to understand.”

Then ask them to finish the passage by reading aloud Romans 4:6-8. I will discuss that passage in next week’s post.