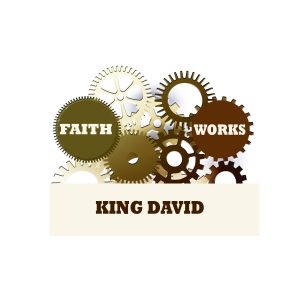 In Romans 4:6-8, Paul cites King David’s words in Psalm 32:1-2 as Old Testament support for his teaching that salvation comes by faith apart from works.

Here’s how I recommend you discuss that with Jehovah’s Witnesses.

Having just discussed Romans 4:4-5 with the Witnesses, ask one of them to read verse 6 aloud.

Romans 4:6 ““Just as David also speaks of the happiness of the man to whom God counts righteousness apart from works:”

Ask, “Since ‘faith without works is dead,’ how can God count this man righteous apart from works? That seems puzzling to me.”

Witnesses should have trouble coming up with an answer.

Don’t rush in to give them your answer—that first comes salvation by faith and with it an inner transformation that produces the works.

Let them wrestle with it.

Give the Holy Spirit time to work.

The goal is to get them to engage with what the Scripture is saying.

When you are ready, have them read aloud verse 7.

Romans 4:7: “Happy are those whose lawless deeds have been pardoned and whose sins have been covered;”

Ask, “On what basis did Jehovah pardon this man’s lawless deeds and cover his sins?”

You are looking for them to say that it is by faith.

Follow up by asking, “According to Paul, what did the man’s works have to do with getting him this forgiveness and covering?”

The answer is that good works had nothing to do with it.

Ask, “Can we know for certain that our own transgressions have been pardoned and that our sins have been covered because of our faith or does that depend on our works?”

This question may also give them trouble.

We can know that our transgressions have been pardoned and our sins covered because we have faith in Christ, but the Watchtower doesn’t believe that.

Jehovah’s Witnesses have no assurance of forgiveness and salvsalation.

Romans 4:8 “happy is the man whose sin Jehovah will by no means take into account.”

After one of them reads this verse aloud, ask, “According to this verse, can we by faith know that Jehovah will by no means take our sins into account or does that depend on our works?”

Most likely they will want to take you over to James. Again, tell them you will be glad to look at James a little later, but first you want to understand what Paul is saying about this.

He says that Abraham was declared righteous by God apart from works.

He says that this results in Christians being blessed because Jehovah has pardoned our transgressions and covered our sins.

Jehovah’s Witnesses have no such assurance because they think their salvation depends on constant works and endurance.

Pray silently that God will reveal the contrast to them.

The Sequence of Faith and Works