The Sequence of Faith and Works 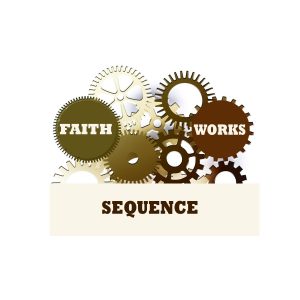 Ephesians 2:8-10 is another great Pauline passage to show the proper relationship between faith and works.

Have one the Witnesses read verse 8 aloud:

Ephesians 2:8:  “By this undeserved kindness you have been saved through faith, and this is not of your own doing; rather, it is God’s gift.”

Say, “Paul speaks in the past tense. He says his readers have been saved. If salvation is based partly on continued works and faithfulness, how can Paul give his readers assurance that they have already received salvation?”

Given that the Watchtower teaches that salvation is based on a combination of faith and works, Jehovah’s Witnesses have no assurance of salvation.

The most they can say is that they believe they are saved up to this point in their lives.

Next ask, “According to this verse, what role does Paul say works played in his readers’ obtaining their salvation?”

Wait for their answer.

See if it is the same as Paul’s answer in the next verse, namely, that works have nothing to do with it.

God credits us with righteousness as a gift purchased by Jesus Christ.

Ephesians 2:9: “No, it is not a result of works, so that no one should have grounds for boasting.”

If the Witnesses have said that salvation requires faith plus works, ask, “According to this verse, what role does Paul say works played in his readers’ obtaining their salvation?”

Follow up by asking, “According to this verse, if our works were involved, what would we be able to do?”

We could boast about our loyalty and endurance. But Paul says that no one can boast because our works do not contribute to our salvation.

This is the same point he made in Romans 4:2: “For instance, if Abraham was declared righteous as a result of works, he would have reason to boast, but not with God.”

Because of this Scripture, Jehovah’s Witnesses may tell you that they agree that salvation is a gift and that we can’t earn it by our works.

If they do, say, “I’m confused. Please explain to me the difference between meriting salvation by our works—which you just said we can’t do—and proving worthy of everlasting life by our works—which I understand the Watchtower teaches we must do in order to be saved.”

Many Christians stop by citing Ephesians 2:8-9, but verse 10 balances Paul’s teaching by telling us that works do have an important role in the Christian life.

Ask the Witnesses to read that verse out loud as well:

Ephesians 2:10: “We are God’s handiwork and were created in union with Christ Jesus for good works, which God determined in advance for us to walk in them.”

You can say, “It seems clear from this that works are important. God has good works for every Christian to do. But based on everything Paul has said in these three verses, doesn’t it seem that these works are the products of salvation, not the prerequisites to salvation?”

If they ask you what you mean by that, consider using two equations taught by  Evidence Ministries founder Keith Walker:

You can sum up your understanding of the biblical relationship between faith and works this way:

Whose Works — God’s or Ours?

8 Comments on "The Sequence of Faith and Works"

Thank you for this! This is so great, because the specific questions you provide really help put what the verses are saying into focus, and make it more difficult for the JW to slide past this.

Thank you, Bridget! I’d appreciate feedback from people who try things I suggest. If anyone has found better ways to get through to the Witnesses on various topics, please feel free to share them with all of us.

This post is very helpful. To me, anyway. I’m still trying to figure out how a JW can read John 20:28, 29 and NOT see it for what it plainly said. In any case, thank you for the post!

Hello David! I cannot thank you enough for all you have done to put this information out to people who are burdened to reach the Jehovah’s Witnesses. I believe that God is calling me to witness to them, and this post in particular is one that I will use to do just that. I have a weekly opportunity that is waiting for me to witness to them as they are always standing on the corner at a local outdoor market. I am preparing to talk to them and will use this verse to begin witnessing to them. I pray that… Read more »
Reply   -   Share

Thank you for your kind words, Cathy, and bless you for caring enough about JWs to prepare and witness to them! I hope you have a copy of my book, Getting Through to Jehovah’s Witnesses, where I give more than a dozen approaches you can use on various topics. Remember to go slowly with them. Understatement usually works much better than bold declarations. I know from experience that a fact or scripture which I think clearly proves the WT wrong often has little or no effect on JWs. Witnessing effectively to them is a marathon, not a sprint, and requires… Read more »
Reply   -   Share

Thank you, David! I found out all that you have said the hard way. I agreed to let two ladies meet with me to have a Bible study. I had hoped that I could explain everything that I believed to them. Instead, I was overwhelmed with everything that I felt that I needed to cover with them and to no avail! It was so frustrating. I met with them for probably five weeks, and it just kept getting harder and harder. That’s when I found your blog and realized a bite-sized approach was so much better! I feel that I… Read more »
Reply   -   Share

Thanks, Cathy! If I can be of help to you in any way, feel free to message me. God bless you for caring about Jehovah’s Witnesses!