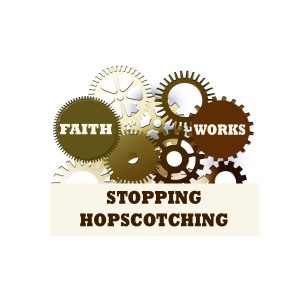 Jehovah’s Witnesses are masters at hopscotching around the Bible.

If you show them a Bible passage that contradicts Watchtower teaching, they will try to take you somewhere else.

Let’s talk about how to stop that.

Let’s say you want to show them what Paul says in Romans 4:1-3 in their New World Translation:

That being so, what will we say was gained by Abraham, our forefather according to the flesh? 2 For instance, if Abraham was declared righteous as a result of works, he would have reason to boast, but not with God. 3 For what does the scripture say? “Abraham put faith in Jehovah, and it was counted to him as righteousness.”

If you ask them to read those verses silently to themselves, most likely they will glance them over and start talking to you about what James says about the importance of works.

They really didn’t engage with the text.

On the other hand, if you read the verses out loud, most likely they will half listen, nod politely, and then brush past it by saying, “Yes, but what about James?”

Again, they didn’t engage with what Paul said at all.

As I mentioned in a previous post, How to Present Scriptures to Jehovah’s Witnesses, the best way I have found to get Witnesses to spend time in a Bible text is to ask them to read it out loud from their own Bibles.

That way—at least at some level—they will have heard Paul’s own words.

I recommend that you ask the Witnesses to state in their own words what the passage is teaching.

Maybe you’ll be pleasantly surprised, but most likely they’ll say something like, “Well, Paul stresses faith here, but let’s look at what James 2 says.”

They’re trying to hopscotch you to some of their favorite proof texts.

Don’t let them do it.

Remember, they have come to teach you “the truth.”

You are their student.

You are the one with the questions, so you can direct the conversation.

Tell them, “I’m sorry, but I get confused if I jump back and forth in the Bible. I know it’s hard to reconcile what Paul and James say about faith and works and I want to study this carefully. I’ll be happy to look at James later because I believe God’s Word doesn’t contradict itself. But right now I want to hear your explanation of what Paul is teaching because I want to make sure I correctly understand Paul before we move on to James or anyone else.”

Now that you’ve stopped them from hopscotching away from a text, your next task will be to get them to engage with the text verse-by-verse.

I’ll discuss how to do that next week.

How to Present Scriptures to Jehovah’s Witnesses