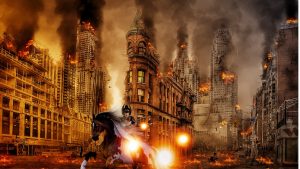 The Watchtower does not believe in everlasting torment. “Many have striven to be pious out of fear of hellfire,” it says, “but God does not want you to serve him because you are terrified of him.”[1]

However, many former members have related on online forums that as Jehovah’s Witnesses they were terrified by constant Watchtower teaching about Armageddon.

The word “Armageddon” only appears in one Bible verse (Revelation 16:16), but the Watchtower talks about it all the time, using it to stand for God’s cataclysmic judgments “on the great day of God the Almighty.” (Revelation 16:14-21).

Some ex-Witnesses stated that as children they hid under their bed whenever a storm came up because they were afraid they were about to be destroyed by Jehovah.

Granted, a number of Bible prophecies of the coming destruction are alarming. For example, the prophet Joel spoke of “the great and fear-inspiring day of Jehovah.” (Joel 2:31) God’s arsenal includes snow, hail, earthquake, infectious disease, flooding downpour, rain of fire and sulfur, deadly confusion, lightning, and a flesh-rotting scourge… (Job 38:22, 23; Ezekiel 38:14-23; Habakkuk 3:10, 11; Zechariah 14:12, 13) And the Bible graphically describes a time in which the dead will cover the surface of the earth, left either as manure or as food for the birds and other animals. (Jeremiah 25:33, 34; Ezekiel 39:17-20) Fright will grip God’s enemies during this war.—Revelation 6:16, 17.[2]

The Watchtower comments: “Does this mean that obedient worshippers of the true God should be afraid of the astonishing events that will take place at Armageddon? By no means, for God’s servants on earth will not take part in this conflict. Moreover, they will be protected by Jehovah. Still, true worshippers will be awestruck by the fear-inspiring display of God’s power.”[3]

Given that statement, why are so many Jehovah’s Witnesses afraid that God was about to destroy them along with his enemies?

The key is in the phrases “obedient worshippers” and “true worshippers.” Remember that the Watchtower teaches that works are essential for our salvation. So just how “obedient” is obedient enough? Just how “true” does our worship need to be?

What do we have to do to escape the destruction of Armageddon? The Watchtower states: “Proper desires can be satisfied in moderation, but improper desires must be eliminated or kept under strict control. Wrong desires begin in the heart and that in an early age with ‘I want, I want, I want’ this, that or the other thing. All not having sound hearts will be destroyed at Armageddon.”[4]

A Witness can never know if his or her heart is sound enough to avoid his being destroyed at Armageddon. What improper desires that begin in the heart does he have to eliminate? To what extent does he need to eliminate or control them?

If we live under a religious system based on law rather than grace, what do we do with this warning in James 2:10?: “For whoever keeps the whole law but fails in one point has become guilty of all of it.”

What about children of Jehovah’s Witnesses? Are they going to be spared at Armageddon? Not necessarily, according to the Watchtower:

It appears that some parents are content to allow their children to drift along. The children attend meetings and have some share in field service, but often they have not built up their own relationship with God. In time “the desire of the flesh and the desire of the eyes” could lead many of such youths away from the truth. (1 John 2:16) How sad it would be for parents to survive Armageddon but because of past neglect leave their children behind as casualties![5]

The Jehovah’s Witnesses who come to your door live with this sort of fear and uncertainty all their lives.

Have compassion and share with them the total forgiveness and acceptance the Bible really offers—a secure eternity based on the perfect, finished work of Christ rather than on the never-finished, imperfect efforts they can muster themselves.

Romans 8:1-4: “There is therefore now no condemnation for those who are in Christ Jesus. For the law of the Spirit of life has set you free in Christ Jesus from the law of sin and death. For God has done what the law, weakened by the flesh, could not do. By sending his own Son in the likeness of sinful flesh and for sin, he condemned sin in the flesh, in order that the righteous requirement of the law might be fulfilled in us, who walk not according to the flesh but according to the Spirit.”