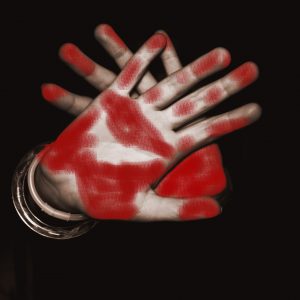 “Bloodguilt” isn’t a concept most of us think about, but the Watchtower uses it as a powerful motivator to keep Jehovah’s Witnesses going door-to-door witnessing.

It claims that a Christian can become bloodguilty before God in several ways. One of them is “by failing to preach the good news of the Kingdom, thereby withholding the lifesaving information it contains.”[1]

It compares the Jehovah’s Witnesses’ task to the responsibility God gave to the prophet Ezekiel in the Old Testament:

The responsibility of Jehovah’s dedicated Witnesses to warn people of God’s coming judgment can be compared to that of Ezekiel in his time. He was designated a watchman to the house of Israel. His assignment was to warn the Israelites that execution was coming upon them if they did not turn away from their bad ways. If he as a watchman failed to sound the warning, execution would still come upon the wicked people, but their blood would be upon the head of the negligent watchman.[2]

In his farewell address to the Ephesian elders, Paul stated, “I testify to you this day that I am innocent of the blood of all, for I did not shrink from declaring to you the whole counsel of God.” (Acts 20:26-27). In another place, Paul exclaimed, “Woe to me if I do not preach the gospel!” (1 Corinthians 9:16)

Does this mean that Paul was afraid of being condemned by God if he didn’t do enough witnessing? No, for Paul is the one who wrote, “There is therefore now no condemnation for those who are in Christ Jesus. For the law of the Spirit of life has set you free in Christ Jesus from the law of sin and death.” (Romans 8:1-2)

Additionally, 1 John 4:18-19 states, “There is no fear in love, but perfect love casts out fear. For fear has to do with punishment, and whoever fears has not been perfected in love. We love because he first loved us.”

But the Watchtower religion is based on law, not grace. It concludes that Paul was just one of Jehovah’s Witnesses whose salvation depended on not incurring bloodguilt from slacking off in door-to-door witnessing:

“Failure to warn the people will incur bloodguilt. (Ezek. 3:18, 19) Like the apostle Paul, we want to be able to say that we are ‘clean from the blood of all men’… Paul “‘thoroughly bore witness’ in his assigned territory. Using the house-to-house record properly will help us to bear thorough witness in our assigned territory.”[3]

The Watchtower tells Jehovah’s Witnesses that their receipt of everlasting life is dependent on their diligently fulfilling their part of the door-to-door witnessing: “So it is with the watchman class today, the remnant of anointed followers of Jesus Christ. All of these, together with more than three million of their companions who have the hope of surviving the end of this system of things and receiving everlasting life on earth, must never slack off from preaching the good news of God’s Kingdom and warning of the coming execution of his judgment. In this way they avoid bloodguilt.”[4]

Jehovah’s Witnesses don’t celebrate holidays.[5] In fact, according to the Watchtower, that’s a time when they should be out doing extra witnessing: “In every community at various times during the year, there are secular holidays for which children are excused from school and employees are given time off from work. These are excellent opportunities for the congregation to have an increased share in the field ministry. The elders should plan ahead for these occasions and notify the congregation well in advance of the arrangements that are being made for group witnessing during holiday periods.”[6]

Jehovah’s Witnesses can never do enough. As far as putting in long hours going door-to-door is concerned, the Watchtower asks, “If you could be a regular pioneer but are not, can you “struggle” to make adjustments in your life so as to pioneer?”[7]

It states, “Individuals locked out from entering into everlasting life could even include those who have slacked off in their sacred service to Jehovah and now have a take-it-easy approach to true worship. Their zeal for Kingdom interests has become lukewarm. (Revelation 3:15, 16) True, they may still ‘have a form of godly devotion’—token field service and meeting attendance—but lack evidence of the kind of faith that is the real driving force behind pure worship.”[8]

Summarizing, the Watchtower asks Jehovah’s Witnesses: “Are you doing all you can?”[9]

That one question alone keeps Jehovah’s Witnesses under a constant burden of guilty. When you think about it, are any of us doing ALL we can?

This emphasis by the Watchtower on law and “bloodguilt” and on the need to do everything they can keeps Jehovah’s Witnesses on a constant treadmill of works and constantly fearful that they won’t prove worthy of everlasting life.

I believe it is critical as Christians that we understand this mindset, that we have compassion on Jehovah’s Witness, and that we share with them the real gospel of grace—not because we fear incurring “bloodguilt,” but because we love them.