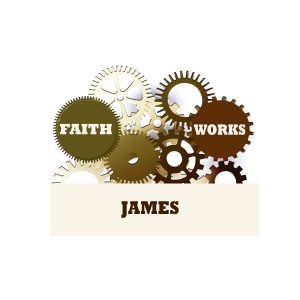 After you show Jehovah’s Witnesses that Paul says we are saved by faith apart from works, they are certain to take you to James 2:21-24 to try to persuade you that salvation is a product of faith plus works.

Here is how you can respond.

Ask the Witnesses to read the verses aloud.

James 2:21: “Was not Abraham our father declared righteous by works after he offered up Isaac his son on the altar?”

Acknowledge that at first appearance, James seems to be saying the exact opposite of what Paul said, but since the Bible doesn’t contradict itself, it must be possible to reconcile the passages.

Ask them how they reconcile the two passages. In reality, they don’t. They shelve Paul and quote James.

Ask them if you can show them how you think the passages can be reconciled and get their take on it. By asking for their opinion, you’ll be allowing them to fulfill what they consider to be their rightful roles as teachers of the truth.

Follow up by asking, “Which came first for Abraham—the righteousness by faith or the righteousness of works?” Faith. That happened in Genesis 15. He didn’t offer Isaac on the altar until Genesis 22, more than 25 years later.

Ask, “Was Abraham righteous all those 25-plus years before he did the work of offering Isaac on the altar?”

Yes. How do we know that? Because God declared him righteous in Genesis 15, and if God declares you righteous, you are righteous.

Even though Abraham sinner during those intervening years, such as by siring Ishmael by Hagar, God still considered him righteous and continued to work in his life.

Have them read aloud the next three verses.

James 2:22-24: “You see that his faith was active along with his works and his faith was perfected by his works, and the scripture was fulfilled that says: ‘Abraham put faith in Jehovah, and it was counted to him as righteousness, and he came to be called Jehovah’s friend.’ So you see that a man is to be declared righteous by works and not by faith alone.”

Once again, acknowledge that it’s hard to reconcile what James says here with what Paul said in Romans 4 and Ephesians 2.

You can give your understanding that it was the salvation and the inner righteousness Abraham had already received back in Genesis 15 by faith as a gift—without any works—which led to his further trust of God, and that led to his righteous obedience and works in Genesis 22.

In other words, it was the inner righteousness that he obtained by faith in Genesis 15 that produced the righteous works and obedience in Genesis 22.

The point you need to convey to Jehovah’s Witnesses is that genuine Christian faith does produce righteous works, but the works have nothing to do with saving us or with making us righteous.

Explain to the Witnesses that James’ comments also address the fact that although God can see the faith that is in our hearts without seeing works as proof—as he did with Abraham in Genesis 15—human beings cannot.

Although we are justified by faith alone before God, we are justified before men through works that they can see. That is, the only way people can see that someone has actually had an inner transformation by God based on his faith is by that person’s changed attitudes and behavior. (James 2:18)

Jehovah’s Witnesses think that their works prove that they are “exercising faith” and are therefore “in the truth.” Don’t accuse them of anything, but do point out that when we think about works, we need to be cautious in our evaluation. People who have not experienced an inner transformation by God can, through self-effort, produce religious works that appear righteous to us and to others, but those works will be rejected by God because merely human-generated righteousness is like filthy rags in his sight. (Isaiah 64:6).

The Pharisees are a prime example of this. They thought they were the one group on earth that truly pleased God by their devotion to the Law and to doing good works. Yet Jesus said that while they looked beautiful on the outside, they were spiritually dead on the inside (Matthew 23:27-28).

Jehovah’s Witnesses are constantly trying to prove their sincerity, dedication, and loyalty to Jehovah. For that reason, as you discuss James 2, make clear to them that righteous works of which James speaks—works which truly please God—are not works generated by human effort and dedication in order to obtain divine approval or salvation, else they would be something of which we could boast. (Ephesians 2:9). Rather, genuine Christian works must be the product of the righteousness that God previously imparted to us as a gift.

We receive that gift of righteousness solely by faith before we have any works—as Abraham did in Genesis 15—and we are saved at that time. The Holy Spirit then comes inside us to empower us to live righteously. Our good works are then God’s works which he does through us rather than our works done to gain his approval. In this way, righteous Christian works are produced by God and not by our own efforts to make ourselves worthy. (Romans 8:9-14)

2 Comments on "What James Says About Faith and Works"

Thank you! I really appreciate that.