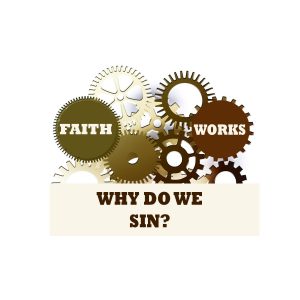 In the previous post entitled Whose Works—God’s or Ours?, I talked about how to get across to Jehovah’s Witnesses the concept that salvation requires a new birth where God transforms us from the inside out.

In response to our claim, a Jehovah’s Witness might reasonably ask, “If the new birth is really an inner transformation that gives people Christ’s righteousness, why don’t born-again people walk in sinless perfection?”

In other words, “Why do supposedly born-again people still sin?”

The short answer to that question is, “Because our bodies haven’t been redeemed yet. That will take place at the resurrection.”

Point out that by saying that you aren’t excusing sin—you’re explaining it.

Romans 7 tells us that as long as Christians are still in these bodies, there is a power of sin that dwells inside us.

We might compare it to a deeply embedded sliver–it’s an unholy power or force that’s in us but it’s not us.

2 Corinthians 5:17 tells us that born-again people are new creations in Christ Jesus—the old has gone; the new has come.

Nevertheless, we are still vulnerable. We are still capable of willingly yielding to the power of sin.

Contrary to what the Watchtower teaches, that passage is not talking about getting a clean slate at our physical death. Rather, it’s talking about our dying with Christ spiritually and being freed in this life from the power of sin to control us.

As we talk with Jehovah’s Witnesses, we need emphasize our conviction that the biblical relationship between faith and works is critical to our salvation.

In Romans 9, Paul says that the Israelites failed because they didn’t pursue righteousness by faith but as but as if it were based on works.

We can’t by diligent effort make ourselves righteous. Instead, we need to have Christ in us. That’s Colossians 1:27: “Christ in you, the hope of glory…”

That’s also stated in Galatians 2:20: ” I have been crucified with Christ. It is no longer I who live, but Christ lives in me…”

Jesus isn’t just someone who showed us the way to God.

Jesus himself is the way.

Christ in you is salvation.

Born-again people can overcome sin—not by trying harder—but by having faith that we are in Christ and Christ is in us and that our liberation from the power of sin to control us has already taken place.

Then we can choose not to sin.

We can draw on Christ’s righteousness which God has put inside us as a gift in order to live righteously and do good works.

So let’s be clear:

Jesus didn’t die so that sinful human beings could be graded on the curve.

Jesus didn’t die so that we could prove ourselves worthy through self-effort.

Jesus died so that we could—by faith—receive his righteousness as a free gift and be transformed.

Only then will we be able to produce the truly righteous works God is calling us to do.

That’s the biblical relationship of faith and works we need to get across to Jehovah’s Witnesses.

Whose Works — God’s or Ours?