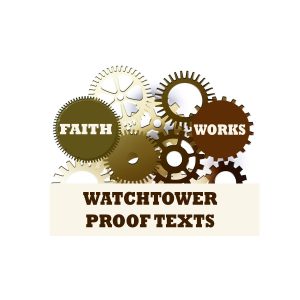 In addition to citing James in support of their doctrine that salvation requires both faith and works, the Watchtower also uses partial quotations from both Matthew 10:22 and Philippians 2:12.

Here’s how you can deal with those texts.

In the Watchtower’s New World Translation, Matthew 10:22 reads: “…the one who has endured to the end will be saved.”

Witnesses have been taught that Jesus’ statement means that they have to endure suffering faithfully throughout their lives in order for God to consider them worthy to make it into Christ’s millennial kingdom.

Have them read the verse in the context of all of Matthew 10.

Point out that it’s speaking of surviving the persecution of the coming tribulation. It’s not talking about how we become righteous enough to obtain everlasting life.

In his statements about how we become righteous in God’s sight, Paul doesn’t mention endurance at all.

We aren’t denying that Bible talks about genuine faith producing patient endurance, because it does.

What we are saying is that endurance has nothing to do with how we become righteous before God and acceptable to him.

Jehovah’s Witnesses often quote from Philippians 2:12: “…keep working out your own salvation with fear and trembling…”

By using that partial quotation, the Watchtower gives the impression that we have to prove worthy of our salvation by our works and tremble in fear lest we fall short and get destroyed.

But that is not what the passage is saying at all.

Remind them that Paul is the one who wrote this in Romans 4:3-6:

3 For what does the scripture say? “Abraham put faith in Jehovah, and it was counted to him as righteousness. 4 Now to the man who works, his pay is not counted as an undeserved kindness but as something owed to him. 5 On the other hand, to the man who does not work but puts faith in the One who declares the ungodly one righteous, his faith is counted as righteousness. 6 Just as David also speaks of the happiness of the man to whom God counts righteousness apart from works… (Watchtower’s New World Translation)

By this undeserved kindness you have been saved through faith, and this is not of your own doing; rather, it is God’s gift. 9 No, it is not a result of works, so that no one should have grounds for boasting.”

Point out to the Witnesses that by quoting Philippians 2:12 removed from its context, the Watchtower would have us believe that Paul completely abandoned what he said in Romans and Ephesians about salvation coming by faith apart from works.

It’s as if he were saying, “I’ve changed my mind. You do have to work for your salvation after all. Not only that, but Jehovah wants you to live every moment in fear and trembling, because if he decides your works aren’t good enough, he’ll destroy you at Armageddon…”

To counter this, have them read the context given by verse 13, where Paul gives a completely different explanation as to why we should fear and tremble.

Philippians 2:12: “…keep on working out your own salvation with fear and trembling.”

Philippians 2:13: “For God is the one who for the sake of his good pleasure energizes you, giving you both the desire and the power to act.”

Ask, “Is Paul saying that Christians should fear and tremble because they might not merit salvation by their works? Or is he saying that people who have already been saved by faith should be in fear—that is, awe—and tremble because they know God has transformed them and that he himself is working inside them to produce righteous works that they could never produce on their own?”

Follow up by asking, “Which interpretation is consistent with Paul’s teaching in Romans and Ephesians that salvation comes by faith apart from works?”