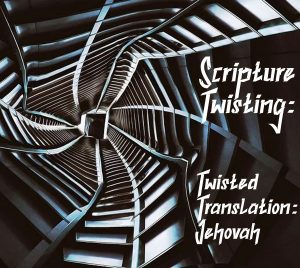 As I noted in the previous post, “twisted translation” can be defined as follows: “The biblical text is retranslated, not in accordance with sound Greek scholarship, to fit the preconceived teachings of a cult.”[1]

Last time, I looked at two of its mistranslations with regard to the identity of Jesus.

The Watchtower defends its rendering by arguing that, given the importance of the divine name, whenever the inspired New Testament writers quoted an Old Testament passage which contained the Tetragrammaton they would have been careful to quote it precisely and so would have included the Tetragrammaton (Jehovah) rather than using the words “kyrios” (Lord) and “theos” (God).

In an explanatory comment on pages 18-19 in the preface of The Kingdom Interlinear Translation of the Greek Scriptures, the Watchtower asks:

How is a modern translator to know or determine when to render the Greek words kyrios and theos into the divine name in his version? By determining where the inspired Christian writers have quoted from the Hebrew Scriptures. Then he must refer back to the original to locate whether the divine name appears there. This was he can determine the identity to give to kyrios and theos and then he can clothe them with personality. Realizing that this is the time and place for it, we have followed this course in rendering our version of the Christian Greek Scriptures.

Violations of its stated principle: Overview

Greek scholar Robert Countess examined the NWT to see how faithfully the Watchtower followed its own stated translation principle. He found that it was 95 percent faithful regarding appearances of the word “kyrios” in the Greek text and 56 percent faithful as far as the word “theos” is concerned.

That is, he found a number of instances in which the Watchtower did not use the name “Jehovah” even though the Old Testament reference was clearly referring to YHWH.

He comments, “One is compelled to ask the question, Why did not NWT follow its principle 100 percent of the time?”[2]

The simple answer is that it left “Jehovah” out of passages where its insertion would show the full deity of Christ and inserted it in verses where it would otherwise appear that Jesus was doing things only God can do.

Here are some examples:

Inserting “Jehovah” in violation of its stated principle

Colossians 3:13 (NWT): “Continue putting up with one another and forgiving one another freely even if anyone has a cause for complaint against another. Just as Jehovah freely forgave you, you must also do the same.”

Leaving “Jehovah” out in violation of its stated principle

No doubt the Watchtower would justify departure from its stated interpretation principle on the grounds that to follow it in those instances would wrongly make it appear that Jesus is God.

But that shows the problem.

The Watchtower starts with its dogma that Jesus is not God and then twists its own renderings of key verses to match its preconceived theology.

Things should work the other way around.

Bible passages should be translated according to established principles of interpretation and then we should examine all the relevant passages in establishing our belief system.

I do not recommend that you quote to Jehovah’s Witnesses Hebrew or Greek scholars who say that the insertion of “Jehovah” into the New Testament is wrong. The Witnesses will simply consider the Watchtower’s translators to be superior.

Instead, do what I have done here. Show the Witnesses that the Watchtower has to depart significantly from its own stated principle of translation in order to keep its doctrine secure.

As I said last time, clearly, something is wrong.

A Word of Caution

What I said in the last post also applies here: Many Jehovah’s Witnesses are not ready for this type of confrontation.

Because of this, addressing this topic works best in two situations

2 Comments on "The Watchtower’s Twisted Translation Regarding “Jehovah”"

I agree with you. I should point out that the Watchtower renders the quotation, “I have been,” to escape the implications you mentioned. By the way, I’m not a pastor. Just an author.