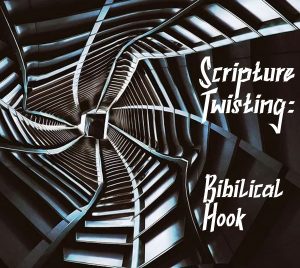 Imagine if the Watchtower simply asserted, “In order to please God, you must believe whatever we tell you whether you understand why or not.”

That statement would be outrageous!

Who would believe it?

So in order to convince people to believe what they say, the Watchtower frequently uses a “Biblical hook”. “Biblical hook” refers to the following twisting of the Bible: “A text of Scripture is quoted primarily as a device to grab the attention of the readers or listeners and then followed by a teaching which is so nonbiblical that it would appear far more dubious to most people had it not been preceded by a reference to Scripture.”[1]

That gave the Watchtower a Biblical hook.

Here are two examples of how they have used it:

“If we have love for Jehovah and for the organization of his people we shall not be suspicious, but shall, as the Bible says, ‘believe all things,’ all the things that The Watchtower brings out.” (Qualified To Be Ministers, 1955, p.156)

Really? By using that hook, suddenly a three word phrase in a chapter on Christian love (“believes all things”) has become proof that:

When you think about it, couldn’t any other religious organization use the same hook and make the same claims?

“Love ‘believes all things.’ This is not to imply that Christians are gullible. The point is that Christians have implicit trust in their heavenly Father; they do not question what he tells them through his written Word and organization. Things work out well for those who in this trusting way go along with God’s way of doing things. For example, Jehovah through his organization has for years warned his people of the harmful effects of using tobacco, and those who heeded this advice were benefited both physically and spiritually. Perhaps some did not understand why they should not use tobacco. Yet it was to their benefit to ‘believe all things’ though not completely understanding the reason why, Scripturally or physically. Today we have the Scriptural basis as well as the fact that the medical world recognizes the sound practical basis for refraining from the use of tobacco.—2 Cor. 7:1.” (Watchtower, 7/15/74, p. 441).

Notice that by using that hook, the Watchtower is teaching:

Many other religious groups also condemned the use of tobacco.

If one of them published the identical article, would the phrase “believes all things” prove that we should believe everything they tell us without question or suspicion?

The best way to show Jehovah’s Witnesses this error is to have them read aloud the hook and then go over with them everything the Watchtower article is claiming it means.

Join with them in looking up scriptures that you know the Watchtower has misquoted (or referenced by citation as support for things they don’t really say) and ask two questions: