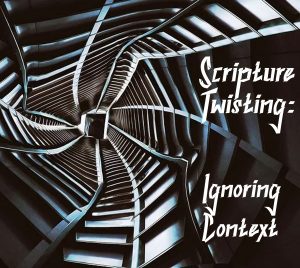 The error of ignoring the immediate context is defined as follows: “A text of Scripture is quoted but removed from the surrounding verses which form the immediate framework for its meaning..”[1]

In my mind, the greatest example of this in Watchtower literature is its use of Ecclesiastes 9:5.

It latches onto one clause in the middle of the verse—“the dead know nothing at all” (NWT)—and turns those words into its doctrine concerning what happens after death.

Based on that statement, it contends that there is no conscious existence after death—no soul or spirit that lives on. People’s only hope is that Jehovah one day may choose to resurrect them and give them a chance (by obedience) to live forever.

Any Bible passage that seems to teach something contrary must be interpreted allegorically (such as Jesus’ account of the rich man and Lazarus in Luke 16:19-31) or in some other way so as to comply with that one six-word clause.

Is the Watchtower’s interpretation consistent with the context of Ecclesiastes 9:5? Let’s look at the context of all of verses 5 and 6, including the highlighted language:

5 For the living know that they will die, but the dead know nothing at all, nor do they have any more reward, because all memory of them is forgotten. 6 Also, their love and their hate and their jealousy have already perished, and they no longer have any share in what is done under the sun.” (NWT)

If you are going to take “the dead know nothing at all” as divine revelation (rather than as the viewpoint of teacher referred to in Ecclesiastes 1:2), then you must also conclude that God is telling us:

In earlier editions of the New World Translation, the Watchtower rendered verse 6 as follows: “…and they have no portion any more to time indefinite in anything that has to be done under the sun.” (emphasis added)

What happened “to time indefinite”? Why did the Watchtower water down verse 6 by taking out those words? Because it would explicitly contradict what the Watchtower teaches about people being resurrected to a paradise earth in Christ’s millennial kingdom! (Its current rendering is relatively ambiguous on that point.)

In their book, How to Read the Bible for All Its Worth, Gordon D. Fee and Douglas Stuart state:

“Ecclesiastes is a wisdom monologue that often puzzles Christians, especially if they read it amiss and assume that because it is Scripture everything said here is from God’s perspective. Ecclesiastes is a very difficult book to read, with several passages that seem self-contradictory and others that seem contradictory to the whole of biblical revelation… What is lacking in the book…are many of the great themes of Scripture with their assurances of God’s own faithfulness toward those who trust in him.”[2]

The best way to show Jehovah’s Witnesses this error is to have them read aloud the entire context of the passage and then ask specific follow-up questions regarding what it all means.

This applies to anything they cite you, especially if their conclusion seems contrary to other passages of Scripture.

If you discuss with them Ecclesiastes 9:5 specifically, please read two earlier posts where I discuss that specific verse in both its immediate and wider contexts: