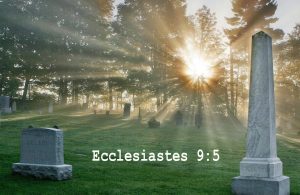 If you try to get them to focus on the context, they usually say, “But the Bible says right here…” and then repeat those words like a mantra. They consider that partial sentence to be the definitive declaration of the state of the dead—all other Bible passages are required to be interpreted to conform to it.

How can we get them to look at that verse in context?

In order to focus on the context, I recommend that you say something like this: “I’m sure you’ll agree with me that just because a statement is made in the Bible doesn’t mean that it expresses God’s viewpoint.”

Then ask one of the Witnesses to read Ecclesiastes 9:5-6 aloud to see whose viewpoint is being expressed: “For the living know that they will die, but the dead know nothing at all, nor do they have any more reward, because all memory of them is forgotten. Also, their love and their hate and their jealousy have already perished, and they no longer have any share in what is done under the sun” (Watchtower’s 2013 New World Translation):

Ask, “Does no one have any further reward beyond the grave? Is all memory of them forgotten? Is there no further hope of life on earth? Doesn’t that contradict the Watchtower’s teaching that we can live forever in paradise on earth?”

Let them struggle with the contradiction and try to explain it to you. Keep them focused on these verses and avoid letting them jump to other Scriptures.

Then ask them to look at the larger context of passage. Most of the book of Ecclesiastes is expressed—not from God’s eternal perspective—but from the perspective of a man who sees this present life as all there is, the only possible source of satisfaction. Have one of the Witnesses read aloud Ecclesiastes 1:2: “’The greatest futility!’ says the congregator, ‘The greatest futility! Everything is futile!” (Watchtower’s 2013 New World Translation)

Ask, “Does that express God’s viewpoint or a man’s? Is everything really futile? Is God the one telling us that? If so, there would be no point reading on to the next verse, let alone all the way to Ecclesiastes 9! It seems to me pretty clear that what’s being expressed is the opinion of a man who is looking that this life as all there is or as all there will ever be.”

The point you are making is this: The context of Ecclesiastes 9:5—the entire verse, the verses around it, and the book as a whole—refutes the idea that this is God’s revelation concerning the state of the dead to which our interpretation of all other Bible passages must conform.

At this point, they will probably want to jump to another part of the Bible. I recommend that you say, “I’ll be glad to look elsewhere in the Bible with you, but first let’s settle this issue about how Ecclesiastes is to be understood. My point is that we can’t just read a few words in one verse and say, ‘That’s it. The Bible says it.’ Instead, we have to look very carefully at the full context in order to know whether the words express God’s viewpoint or man’s. If God is telling us that the dead are conscious of nothing at all then he is also telling us that dead people have been completely forgotten and that they will have no reward. But that doesn’t come from God. That’s the viewpoint of man.”

Have you ever discussed Ecclesiastes 9:5 with Jehovah’s Witnesses? Do you think this approach would help them understand the importance of considering this verse in context? Do you have other suggestions?

[…] last week’s post, I discussed how to respond to six words from Ecclesiastes 9:5, the Watchtower’s primary proof […]

Anatomy of a Proof Text: Discuss Ezekiel 18:4 with Jehovah's Witnesses

Discussing the Rich Man and Lazarus: Explaining the Christian View

[…] using that verse as a proof text, you can respond with the suggestions I made in earlier posts on Ecclesiastes 9:5 and the book of Ecclesiastes as a […]

Yes it is a view from a man. Considered to be the wisest man who ever lived. One of few who had a communication with god. His name was Solomon who most agree wrote the book. I doubt god would confuse his knowledge. Basically he is trying to convey anything you do on earth you cannot take with you or see to completion. There is a bigger picture to the grand scheme of things than this short life you have.

I agree that he is saying that anything we do on earth we can’t take with us or see to completion. It’s not talking about whether there’s any part of us that survives death elsewhere. The statements in Ecclesiastes give no indication of a coming resurrection. I’m not saying Solomon didn’t believe in a resurrection, but much of Ecclesiastes is written from the perspective of this life only.

Yes but wouldn’t you see something to completion if you lived beyond your human form. Solomon was given his wisdom by god so wouldn’t it be though his perspective too. God knows this and I would do the same if I were him as far as death is concerned. Even though its not what most people want to hear about death it is a humbling reality. With all the recent shootings is it not fair that the shooters get a second chance at life. I don’t believe god would torment (hell)people for eternity. Same goes to past kings,dictators, martyrs and… Read more »
Reply   -   Share

Your question assumes that if he person lives beyond their human form, they would be able to interact with what it happening in this world. In Jesus’ account of the rich man and Lazarus in Luke 16, the rich man wants Abraham to send Lazarus to his 5 brothers, but neither the rich man nor Lazarus are able to go there. With regard to what happens to the wicked after death, would it really be justice for a petty thief who refused to repent (such as one of the two who died alongside Jesus) should receive the exact same penalty… Read more »
Reply   -   Share