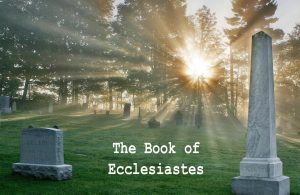 In last week’s post, I discussed how to respond to six words from Ecclesiastes 9:5, the Watchtower’s primary proof text for its teaching that the dead have no conscious existence until the resurrection: “… the dead know nothing at all…” (all quotes will be from the Watchtower’s own 2013 New World Translation)

My recommendation was to have them read the rest of verse 5 and all of verse 6 to see if the passage expresses God’s viewpoint or merely the perspective of a man who is looking on this life as all there is: “… the dead know nothing at all, nor do they have any more reward, because all memory of them is forgotten. Also, their love and their hate and their jealousy have already perished, and they no longer have any share in what is done under the sun.”

Sometimes Witnesses will persist in ignoring the context and insist that “the dead know nothing at all” is  truth revealed by God. If that happens, I recommend that you have them look at other passages in Ecclesiastes to see if they express Jehovah’s viewpoint. Here are several passages you can use for this purpose. Beware of overkill, though. Only use as many of them as necessary to make the point.

After each passage you use, ask, “Is this statement true? Is this what God wants us to believe about life?” Let them come up an explanation. After you have introduced several passages that they are unable to explain, you can say, “Do you see why I believe that many of the statements in Ecclesiastes are expressing the viewpoint of a man who thinks this life is all there is?’

1:13: “I set my heart to study and explore with wisdom everything that has been done under the heavens—the miserable occupation that God has given to the sons of men that keeps them occupied.”

1:14: “I saw all the works that were done under the sun, And look! everything was futile, a chasing after the wind”.”

1:15: “What is crooked cannot be made straight, And what is lacking cannot possibly be counted.”

2:11: “…I saw that everything was futile, a chasing after the wind; there was nothing of real value under the sun.”

2:14: “The wise man has eyes in his head, while the fool walks in the darkness; but I came to realize that the same fate overtakes them both.”

2:17: “So I came to hate life, because everything being done under the sun seemed distressing to me, for everything was futile, a chasing after the wind.”

3:19: “…man has no superiority over animals, for everything is futile.”

4:2-3: “…I congratulated the dead who had already died rather than the living who were still alive. And better off than both of them is the one who has not yet been born, who has not seen the distressing deeds that are done under the sun.”

6:8: “…what advantage does the wise one have over the stupid one, or of what benefit is it that the poor man knows how to survive?”

6:12: “Who knows what is best for a man to do in life during the few days of his futile life, which he spends like a shadow?…”

7:3: “Better is distress than laughter, for the sadness of the face makes the heart better.”

7:16: “Do not be overly righteous, nor show yourself excessively wise.”

8:15: “…there is nothing better for man under the sun than to eat and drink and rejoice…”

When you quote some of these passages, the Witnesses may complain that you have only quoted part of the verse or passage.

So much the better! You can point out that this is exactly what the Watchtower is doing when it bases its teaching on what happens after death by pulling six words out of Ecclesiastes 9:5 and turning them into doctrine: “…the dead know nothing at all…”

Do you think having the Witnesses examine some of these verses will illustrate the importance of considering this verse in context? Do you have other suggestions?

Anatomy of a Proof Text: Ezekiel 18:4

Discussing the Rich Man and Lazarus: Explaining the Christian View

[…] text, you can respond with the suggestions I made in earlier posts on Ecclesiastes 9:5 and the book of Ecclesiastes as a […]