Anatomy of a Proof Text: Ezekiel 18:4 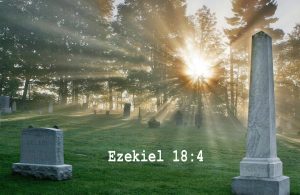 To a Jehovah’s Witness, this verse proves that at death, human beings are not conscious of anything; rather, they go out of existence completely unless and until Jehovah decides to resurrect them.

They don’t seem aware that they are making a lot of intermediate assumptions in order to arrive at that conclusion.

Here are some of those assumptions:

1. This verse teaches what happens to us when we die.

When the Watchtower apply this verse to what happens after death, they completely ignore the context of the verse. The Israelites were complaining that they were being punished for the sins of their fathers. God’s response was that lawbreakers will die for their own sins, not for the sins of others. He wasn’t talking about whether or not there is a conscious afterlife.

The Watchtower also ignores context in similar passages. For example, Psalm 146:4 reads: “His spirit goes out, he returns to the ground; on that very day his thoughts perish” (Watchtower’s 2013 New World Translation). The Watchtower quotes this verse in isolation as if it were speaking about the condition of the dead. However, the context is verse 3: “Do not put your trust in princes, nor in a son of man, who cannot bring salvation.” In other words, the passage isn’t talking about whether people have souls or spirits which are still conscious after death. It is simply explaining why we shouldn’t place our trust in powerful men. They die and are buried, and all their plans and promises die with them.

It is true that sometimes the word “soul” is used as a synecdoche representing the entire person. For example, in English we may say, “Over 1,500 souls died when the Titanic went down.

However, it’s not always used that way. For example, Genesis 35:18 says of Rachel, “And as her soul was departing (for she died)…” The Watchtower renders this “just as her life was slipping away” (2013 New World Translation), but their footnote admits that it literally says “her soul was going out.” The Watchtower teaching that the soul dies when the person dies ignores these passages.

3. Death is the total absence of consciousness, which is the equivalent of nonexistence.

That begs the question. It assumes the very thing they are trying to prove. In order to come to that conclusion, they need other proof texts. Their most notable one is Ecclesiastes 9:5. In other posts, I have discussed how to discuss Ecclesiastes 9:5 and the book of Ecclesiastes as a whole with Jehovah’s Witnesses.

In your dealings with the Witnesses, you can bring up some of these points. Don’t, however, directly accuse them of logical errors. Instead, say you find these things confusing and ask them to explain.

Have you been successful in showing Jehovah’s Witnesses that their reliance on Ezekiel 18:4 is misplaced? Do you find my comments helpful?

Death and Resurrection, The Nature of Man

Why is no one willing to comment upon the argument that interpretation of any peice of literature (or upon any quoted utterance) by necessity, requires it be put in its proper context? Perhaps because the logical fallacy in not doing so is self-evident and needn’t be explained. Unfortunately, since the election of 2016 Americans have proven that they are willing to believe absolutely any ridiculous lie peddled to them indiscriminately. Further, the “greatest nation” has readily demonstrated it can ignore truth, even when it stands before them, clear and concise. Until idiots are educated, they will follow any shepherd as… Read more »
Reply   -   Share