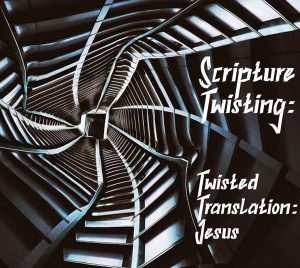 “Twisted translation” can be defined as follows: “The biblical text is retranslated, not in accordance with sound Greek scholarship, to fit the preconceived teachings of a cult.”[1]

Unfortunately, key passages have been mistranslated in order to support Watchtower theology. There are many of these, but I’m going to restrict myself here to a few examples dealing with two important subjects: (1) the identity of Jesus and (2) insertion of the name “Jehovah” 237 times into the New Testament.

In this post, I’ll focus on the identity of Jesus. In the next post, we’ll look at the name “Jehovah.”

The Watchtower insists that Jesus is not God in human flesh. Rather, it teaches that he is Michael the archangel—“a god” (mighty one) but not “the God” (Jehovah). In Watchtower theology, only the Father is Jehovah.

Here are two key examples of the Watchtower’s mistranslation:

I do not recommend that you quote to Jehovah’s Witnesses Hebrew or Greek scholars who say that key Watchtower renderings are wrong. The Witnesses will simply consider the Watchtower’s translators to be superior.

Instead, do what I have done here. Show the Witnesses that the Watchtower has to depart significantly from its own stated rule of translation or from the word-by-word rendering of its own Greek interlinear translation in order to “prove” its doctrine.

That way, it’s not our experts versus the Watchtower.

Clearly, something is wrong.

A Word of Caution

Many Jehovah’s Witnesses are not ready for this type of confrontation.

Because of this, addressing this topic works best in two situations:

Bible Interpretation, Name of God, The Nature of God