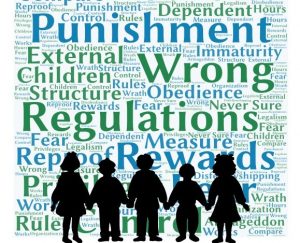 Young children need the structure of household rules established by their parents, backed up by rewards for obedience and punishment for disobedience. However, if they live under such a system all their lives, something has gone seriously wrong.

Why do I say the Watchtower perpetuates immaturity through legalism? What is wrong with the way it functions?

Fear is a powerful motivator. The ultimate fear Jehovah’s Witnesses have is that they will be destroyed at Armageddon because they haven’t proven worthy to survive God’s wrath against the evil and corrupt world system. Of course, in a salvation system based on works, they can never be sure where they stand.

As we have seen in a previous series, nearly everything Jehovah’s Witnesses do at the Kingdom Hall and in the field ministry are considered “privileges” which can be granted or withdrawn by congregation elders.

Elders form judicial committees and impose external punishments on Witnesses in the form of private reproof, public reproof, or disfellowshipping.

Former Jehovah’s Witness Governing Body member Ray Franz wrote, “I did not object to ‘organization’ in the sense of an orderly arrangement.” However, its legitimate “purpose and function… was to build men and women up so that they would not be spiritual babes, dependent on men or on an institutionalized system, but able to act as full-grown, mature Christians. It was not to train them to be simply conformists to a set of organizational rules and regulations…”[1]

We’ve seen the extent to which the Watchtower gets involved in every aspect of Witnesses’ lives, including specifying acceptable and unacceptable sexual practices between consenting Witness spouses.

“I was not opposed to authority,” former Governing Body member Ray Franz wrote. “I was opposed to the extremes to which it was carried. I could not believe that God ever purposed for men to exercise such all-pervading authoritarian control over the lives of fellow member of the Christian congregation.”[2]

Jehovah’s Witnesses are expected to report their door-to-door witnessing activity each month. There are regulations regarding when they can begin and stop counting and whether rest breaks are to be counted or not. Witnesses whose hours are not exemplary are not recommended to be elders or ministerial servants.

Forgotten in all this is 2 Corinthians 10:12: “Not that we dare to classify or compare ourselves with some of those who are commending themselves. But when they measure themselves by one another and compare themselves with one another, they are without understanding.”

A number of ex-Jehovah’s Witnesses have told me of methods they and their fellow Witnesses used to make their field service hours look better.

One rule is that witnessing time doesn’t start until the Witness makes his first contact or attempt at contact for the day. So the 20 minute car ride to the neighborhood couldn’t be counted. However, if they first left a tract at a nearby fast food restaurant or laundromat, the clock would start so that the ride time to the neighborhood could be counted. On the way back, they might knock on the door of one house near where they lived. That way, the travel time back could be counted.

Still others talked mentioned “the pioneer shuffle.” They would partner with Witnesses who do field ministry nearly full time (“pioneers”) and discovered that many of them walked very slowly from one house to the next. They put in a lot of hours but only knocked on a relatively small number of doors. Hardly what one would expect from a Witness if they truly believed they were carrying a “life-saving message” about God’s Kingdom to others.

The Watchtower exhorts Jehovah’s Witnesses to “be a true Christian—not a follower of men.”[3]

Yet that is what the legalistic system of the Watchtower makes them.

True story. A former Jehovah’s Witness told me that she heard an elder being approached by an adult male Jehovah’s Witness to ask if the necktie he had worn to the meeting was acceptable! He was afraid it wasn’t and that he might cause other Witnesses to stumble.

In an article entitled, “What Is Our Position Toward Opposers of the Truth?”, the Watchtower stated the following:

[Opposers] may also question the need for an organization to direct the minds of God’s people. Their view is, God’s spirit can direct individuals without some central, organized body of men giving direction. They will declare that all one needs to do is to read the Bible. But Christendom has been reading the Bible for centuries. And look at the indistinct trumpet call coming from Christendom today! See the confusion and misunderstanding as to the true message contained in God’s Word! What a contrast this is to the foretold peace and unity among true Christians who not only read the Bible but search out and zealously apply its teachings!”[4] (emphasis added)

As the Watchtower actually acknowledged many years ago, “… a newly converted man or an immature Christian has a strong urge to get older Christians to make important decisions for him, whereas God holds him responsible to make his own decisions on the basis of Christian guiding principles. (Gal. 6:5)”[5]

As we make every effort to get through to Jehovah’s Witnesses with the real gospel message, we need to try to focus them on what the Bible is really saying and—by so doing—to help wean them from reliance on men.

We should show them from the scriptures that the gift of the indwelling Holy Spirit is for all Christians, not just 144,000 “anointed” ones. Romans 8:9: “However, you are in harmony, not with the flesh, but with the spirit, if God’s spirit truly dwells in you. But if anyone does not have Christ’s spirit, this person does not belong to him.” (Watchtower’s New World Translation, 2013 edition)

The genuine Christian life is not a matter of us trying hard to establish our own righteousness. (Romans 10:1-3). Rather, God’s righteousness is a gift of Christ’s own life, which we receive when we are saved. At that time, the Holy Spirit comes to dwell inside us. As we submit to him, he produces the fruit of righteousness which God desires— love, joy, peace, patience, kindness, goodness, faithfulness, gentleness, self-control; against such things there is no law.” (Galatians 3:22-23)

Thanks so much for this post. I’m studying with JW’s in HOPES of being able to share Christ with them. (They showed up, I didn’t invite) . I do understand the whole issue of immaturity. The book being used as part of the ‘bible’ study’ would make a grade school primer read like Orwell’s 1984. Absolutely remedial! So I’m going to use that same book and do a more IN-DEPTH study. I have to. If not, I wouldn’t be able to continue with it.
Reply   -   Share