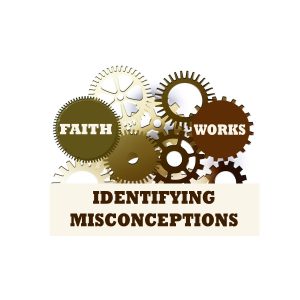 When you tell Jehovah’s Witnesses that salvation comes by faith apart from works, they completely misunderstand what you are saying.

In order to overcome their misconceptions, we first need to identify them and realize why Witnesses have them.

When you tell them that works have no part in the salvation process, they think you are claiming that all you have to do is muster up some sort of intellectual belief in Jesus without genuine repentance of sin and Jesus saves you while leaving you free to sin all you want to.

Part of the problem is the fact that the Watchtower teaches Jehovah’s Witnesses that all of “Christendom” is a counterfeit Christianity controlled by Satan.

They view it as being infested with clergymen who talk about Jesus one day and hire prostitutes the next, all the while raking in money from gullible followers. The highly publicized fall of prominent televangelists reinforces this impression.

When they hear you saying that you believe salvation comes by “faith without works,” they think this is what you are defending.

Jehovah’s Witnesses think you believe that you get saved by praying a simple prayer and that once you are saved, you don’t have to do any good works—just lie back in your recliner and wait for Jesus to take you to heaven when you die.

This view is fostered by the number of professing Christians who show up at church at Christmas and Easter but don’t do much else.

In contrast, Witnesses take pride in the fact that that they volunteer hundreds or even thousands of hours each year going door-to-door “sharing the good news of Jehovah’s kingdom.”

In fact, the Watchtower teaches them that their salvation is dependent on “exercising faith,” not just having faith.

Although “exercising faith” uses the word “faith,” what it really means to Jehovah’s Witnesses is continual works—works they believe they have to do until they die in order to be guaranteed salvation by God.

What kind of continuing works does the Watchtower say are necessary?

It’s easy to understand why they believe this.

In arguing in favor of justification through faith alone, we downplay works.

Often, we forget to acknowledge that works are an important part of the Christian life. It’s just that they have no role whatever in saving us.

Christian works are the products of salvation, not the means to salvation.

Now that we’ve identified these misconceptions, in the next post we’ll consider how to overcome them.

3 Comments on "Identifying Misconceptions About Faith and Works"

Sorry, Dave, this is off the topic of faith/works. i am alone, and have no one else with whom to share these struggles. thank you for your previous kindnesses to me. i met yesterday with them for the first time since my surgery. i started by asking them, “tongue-in-cheek” if they would be willing to try one of my “medicines”. i served them tart cherry juice, known to be the very best food anti-inflammatory and anti-oxidant. that was my way of being loving and kind to them. i have told the primary lady, who comes every time, that i would… Read more »
Reply   -   Share

Sometimes you affect them more than you know. It’s rare that they openly acknowledge that you are right, especially in front of another Witness. They respond with Watchtower dogma but deep down they realize something is wrong. I hope that’s the case with the Witnesses you met with. Keep praying for them.

To Larry Jackson, I realize your post is over six months ago but I wanted to express myself. I am an awakened ex-JW, out for a year, DF four months ago for ‘apostasy’. My husband is a fully indoctrinated JW so I walk a fine line. Firstly I did not know there was a demon named Jehovah? I will research it – can you name a source you got the info? Also bravo for your efforts to awaken the JWs. I do believe the Holy Spirit is directly involved in getting them awakened and out of that Satanic org. The… Read more »
Reply   -   Share