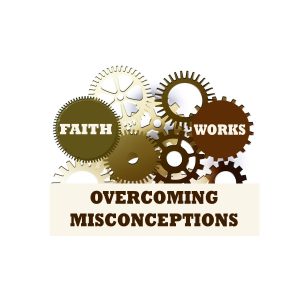 As I pointed out in the previous post, Identifying Misconceptions About Faith and Works, when you tell Jehovah’s Witnesses that salvation comes by faith apart from works, they have three major misconceptions.

Today, we’ll look at how to overcome them.

The three misconceptions I identified last time are these:

Of course, that isn’t what you believe at all.

The problem is that in defending the doctrine of justification by faith we tend to downplay works, and that just fuels these misconceptions.

The usual discussion between Christians and Jehovah’s Witnesses regarding faith and works follows a completely predictable and fruitless pattern.

The Christian starts with verses which teach that salvation is by grace through faith apart from works.

The Witnesses counter by talking about “exercising faith” and quote passages which stress the importance of obedience, endurance, and good works.

The dialogue often results in an impasse in which both sides are frustrated and little, if any, productive communication takes place.

If you begin by showing Jehovah’s Witnesses passages that talk about justification by faith apart from works, they will immediately counter with James 2:26: “…faith without works is dead…”

What I recommend is that you reverse the process.

Bring up James 2:26 first yourself.

Acknowledge up front the importance of good works, obedience, and godly behavior in the Christian life.

Decry the false Christianity that says godliness is unimportant.

After you have laid that foundation, then direct their attention to the “faith alone” passages and ask questions that will lead them to see that, while good works are an important part of the Christian life, they have no part in saving us.

When you decide to use this approach, you can begin by saying something like this:

I’d like to talk with you about the role of faith and works in the Christian life. I want to start by saying that I believe what James 2:26 says, that faith without works is dead.

So if a person says, ‘I’m saved! I’m saved!’ but then he runs off and gets drunk and cheats on his wife, that isn’t biblical Christianity.

When someone tells me, ‘I’m saved!’ but then he sits back in his easy chair and lives a self-absorbed life and never shows any concern for his neighbors, that’s not biblical Christianity either.

By beginning in this fashion, you take the wind out of their sails and forestall the usual Watchtower presentation.

Quite unexpectedly, you bring up “faith without works is dead” before they do.

You criticize immorality and self-centeredness being practiced in the name of Jesus before they have a chance to.

You acknowledge at the outset the importance of works in the Christian life. By doing this, you will correct many of the Witnesses’ false views of what justification by faith is all about.

This will also make your task easier when you go on to talk about what Paul says about faith and works.

Whenever the Witnesses try to steer the discussion toward the importance of works, instead of arguing with them, you can agree that God calls Christians to abandon immorality and to do good works.

Then you can steer the conversation back to Paul’s statements that these works—though important—have nothing whatever to do with saving us. They are the products of salvation, not the prerequisites to salvation.

A good way to transition into Paul’s writings is to say something like this, “As I’ve said, I do believe that works are an important part of the Christian life. But, you know, Paul says some things in Romans about the relationship of faith and works that are hard to reconcile with what James says. I wonder if we could look at some of those verses together. I’d really like to get your take on them.

My next few blog posts will give some general tips for discussing the Bible with Jehovah’s Witnesses and counteracting their tactic of hopscotching the Bible. Then I will discuss the specifics of discussing Paul’s teachings on faith and works.

How to Present Scriptures to Jehovah’s Witnesses

Great way to disarm that argument! Discuss James 2:26 as mentioned, and then perhaps ask, “What does the Bible mean by ‘faith’ in Eph. 2:8,9?”