Jehovah’s Witnesses’ Organizational Mindset: The Only Way to Salvation 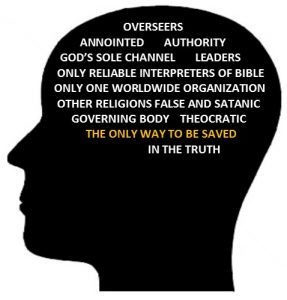 In this series, we are examining four specific Watchtower claims which all sincere Jehovah’s Witnesses believe.

Watchtower Claim #3: The Watchtower organization is the only way to salvation

On its website, the Watchtower denies that it believes that only Jehovah’s Witnesses will be saved.[1] In one sense this is true, because Watchtower teaching is that people who die before God’s impending judgment day of Armageddon without an adequate opportunity to learn “the truth” will be resurrected and given a chance to learn it during the coming 1000-year reign of Christ. However, that statement is misleading in three ways.

First, the Watchtower teaches that during this millennial reign, such persons must come to accept the truth as presented by Jehovah’s Witnesses or be annihilated by God.

Second, the Watchtower teaches that people who die before Armageddon but who did have a fair opportunity to hear and understand Jehovah’s Witnesses’ message must have accepted their message in this lifetime or be destroyed by God without any resurrection hope at all. In other words, those who “willfully disbelieve” will not be resurrected.[2]

Third, the Watchtower also teaches that God’s judgment at Armageddon is coming any day now and that “only Jehovah’s Witnesses, those of the anointed remnant and the ‘great crowd,’ as a united organization under the protection of the Supreme Organizer, have any Scriptural hope of surviving the impending end of this doomed system dominated by Satan the Devil.”[3]

Jehovah’s Witnesses do not believe that a person can be saved by coming directly to Jesus. They must join the Watchtower organization: “Bible students need to get acquainted with the organization of the ‘one flock’ Jesus spoke about at John 10:16. They must appreciate that identifying themselves with Jehovah’s organization is essential to their salvation (Revelation 7:9, 10, 15) Therefore, we should start directing our Bible students to the organization as soon as a Bible study is established.”[4] If you take time to read the verses cited in the quotation, you will discover that they say nothing about an organization being essential to salvation. In fact, they say nothing about an organization at all.

The Watchtower actually reads itself into some of the salvation Scriptures and in so doing supplants Jesus Christ. In John 6:68-69, Jesus asked his twelve disciples if they were going to leave him as many others had done. Peter replied, “Lord, to whom shall we go? You have the words of eternal life. We believe and know that you are the Holy One of God.” In other words, Peter affirmed that there was nowhere else to go for salvation but to Jesus himself. But the Watchtower cites this comment as if it referred to them:

‘Loyalty to Jehovah God requires that we also be loyal to his servants on earth, our fellow Christians… The imperfections of others may test our loyalty in this regard. For instance, when they have been offended, some have manifested a weakness in their loyalty to Jehovah’s organization by staying away from Christian meetings…

Furthermore, suppose a person was to separate himself from Jehovah’s people. Where could he go? Is he not faced with the same issue that confronted Jesus’ apostles when he asked them if they also wanted to leave him? The apostle Peter rightly replied: ‘Lord, whom shall we go away to? You have sayings of everlasting life.’ (John 6:68) There is nowhere else to go but to ‘Babylon the Great,’ the world empire of false religion, or into the clutches of Satan’s political ‘wild beast.’”[5]

The Watchtower sums it up this way: “We will be impelled to serve Jehovah loyally with his organization if we remember that there is nowhere else to go for life eternal.”[6] (emphasis original)

If the Witnesses tell you that affiliation with the Watchtower is essential to your salvation, ask them to comment on Mark 9:38-40. In the Watchtower Bible it reads as follows: “Teacher, we saw someone expelling demons by using your name, and we tried to prevent him, because he was not following us.” But Jesus said: “Do not try to prevent him, for there is no one who will do a powerful work on the basis of my name who will quickly be able to say anything bad about me. For whoever is not against us is for us.

Try to show them that Jehovah’s arrangement for salvation is not coming to an organization but rather coming to Jesus himself.

What other ways might you suggest for leading Jehovah’s Witnesses to focus on Jesus rather than on their organization, which supposedly represents him?

Jehovah’s Witnesses’ Organizational Mindset: All Other Religions Are Satanic