Jehovah’s Witnesses’ Organizational Mindset: All Other Religions Are Satanic 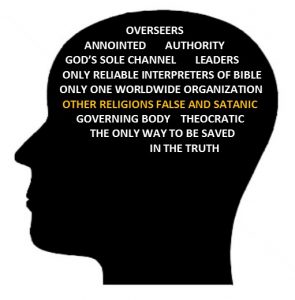 In this series, we are examining four specific Watchtower claims which all sincere Jehovah’s Witnesses believe.

Watchtower Claim #4: All other religious organizations are false and satanic

The Watchtower leads Jehovah’s Witnesses to believe that its teachings are identical to the Bible’s in every way:

Do Jehovah’s Witnesses believe that their religion is the only right one? The Bible does not agree with the modern view that there are many acceptable ways to worship God. Ephesians 4:5 says there is ‘one Lord, one faith.’ Jesus stated: ‘Narrow is the gate and cramped the road leading off into life, and few are the ones finding it… Not everyone saying to me, “Lord, Lord,” will enter into the kingdom of the heavens, but the one doing the will of my Father who is in the heavens will’—Matt. 7:13, 14, 21; see also 1 Corinthians 1:10.

Repeatedly the Scriptures refer to the body of true Christian teachings as ‘the truth,’ and Christianity is spoken of as ‘the way of the truth.’ (1 Tim. 3:15; 2 John 1; 2 Pet. 2:2) Because Jehovah’s Witnesses base all of their beliefs, their standards for conduct, and organizational procedures on the Bible, their faith in the Bible itself as God’s Word gives them the conviction that what they have is indeed the truth. So their position is not egotistical but demonstrates their confidence that the Bible is the right standard against which to measure one’s religion. They are not self-centered but are eager to share their beliefs with others.[1]

“Do not other religions also follow the Bible? Many use it to some extent. But do they really teach and practice what it contains? Consider: (1) From most of their Bible translations they have removed the name of the true God thousands of times. (2) The Trinity doctrine, their concept of God himself, is borrowed from pagan sources and was developed in its present form centuries after Bible writing was completed. (3) Their belief in immortality of the human soul as the basis for continued life is not taken from the Bible; it has roots in ancient Babylon. (4) The theme of Jesus’ preaching was the Kingdom of God, and he sent his disciples out to talk personally to others about it; but the churches today seldom mention that Kingdom and their members are not doing the work of preaching ‘this good news of the kingdom.’ (Matt. 24:14) (5) Jesus said that his true followers could be readily identified by their self-sacrificing love for one another. Is that true of the religions of Christendom when the nations go to war? (6) The Bible says that Christ’s disciples would be no part of the world, and it warns that whoever wants to be a friend of the world makes himself an enemy of God; but the churches of Christendom and their members are deeply involved in the political affairs of the nations. (Jas. 4:4) In view of such a record, can it honestly be said that they really adhere to the Bible?” [2]

Consider also the Watchtower’s sweeping condemnation of Christendom: “Jehovah likened the inhabitants of Jerusalem to those of Sodom and Gomorrah. But Christendom’s immoral condition goes beyond that of Sodom and Gomorrah. Yes, it is even more reprehensible in Jehovah’s eyes. Her teachers flout the Christian moral code. And this engenders a climate of moral degradation in which there are insidious enticements of all kinds to do what is bad. So prevalent is this moral situation that badness is today viewed as normal.”[3]

Evangelical Christians might well agree that some segments of “Christendom” have rejected Bible standards and embraced immorality, but the Watchtower insists that all of Christendom meets this description.

In fact, the Watchtower claims that all of Christendom is about to be destroyed by God. It insists, therefore, that all true Christians—Jehovah’s Witnesses—must separate themselves from the churches of Christendom in order to escape the coming destruction:

“More and more, religious leaders condone practices that are expressly condemned in the Bible. No wonder Christendom will soon come to her end along with the rest of ‘Babylon the Great,’ the world empire of false religion! (Revelation 18:1-5). Following the pattern of Micah’s time, though, Jehovah will have faithful servants remaining on earth. In 1919, faithful anointed Christians made a final break with Christendom and set out to proclaim the good news of the Kingdom to all the nations. (Matthew 24:14)”[4]

In your discussions with Jehovah’s Witnesses, have you ever gotten off track trying to defend your church or denomination? What suggestions do you have for keeping the focus on Jesus?

Jehovah’s Witnesses’ Organizational Mindset: The Only Way to Salvation