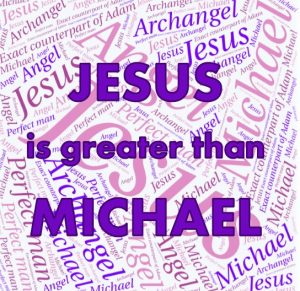 The Watchtower claims that Jesus Christ is also Michael the Archangel.

There are only five passages of Scripture that mention Michael by name. A sixth passage refers to “the archangel” without calling him Michael.

In the previous post, I covered one of those passages—Revelation 12:7-9. In this post, I will discuss the other five. I recommend that you have the Witnesses look with you one-by-one at each of these Scriptures.

Daniel 10:13 reads as follows: “But the prince of the Persian kingdom resisted me twenty-one days. Then Michael, one of the chief princes, came to help me, because I was detained there with the king of Persia” (emphasis added).

I recommend that you say something like this: “This passage calls Michael one of the chief princes. Wouldn’t that make him one of a group of such princes? But the Bible says that Jesus is unique, not one among many princes that are equal in rank.”

Daniel 10:21 states, “…but first I will tell you what is written in the Book of Truth. No one supports me against them except Michael, your prince.”

Ask, “Where does this verse indicate that it is speaking about the Messiah? In fact, isn’t Jesus God’s chosen king, not a prince?

Daniel 12:1 says, “At that time Michael, the great prince who protects your people, will arise. There will be a time of distress such as has not happened from the beginning of nations until then. But at that time your people—everyone whose name is found written in the book—will be delivered.”

In it book Reasoning from the Scriptures (p. 218), the Watchtower argues as follows: “Daniel 12:1 (RS) associates the ‘standing up of Michael’ to act with authority with ‘a time of trouble, such as never has been since there was a nation till that time.’ That would certainly fit the experience of the nations when Christ as heavenly executioner takes action against them. So the evidence indicates that the Son of God was known as Michael before he came to earth and is known also by that name since his return to heaven where he resides as the glorified spirit Son of God.”

If Witnesses make this argument, point out that all Daniel 12:1 indicates is that Michael will rise up for God’s people during the tribulation in the end times. Nowhere in the passage does Daniel identify Michael as being the Messiah, the “Son of Man.”

Jude 9 reads, “But when Michael the archangel had a difference with the Devil and was disputing about Moses’ body, he did not dare to bring a judgment against him in abusive terms, but said: ‘May Jehovah rebuke you’ ” (RNWT).

With regard to this verse, point out that in contrast to this subordination and restraint, Jesus confronted Satan directly. On multiple occasions, he ordered demons to leave people. When Jesus was tempted by Satan, he did not hesitate to rebuke Satan to his face. Three times he countered Satan’s temptations with Scripture. The final time he told him directly, “Away from me, Satan!” and Satan obeyed (Matthew 4:10).

When Peter tried to dissuade Jesus from going to his death, rather than address Peter, Jesus directly rebuked the devil, saying, “Get behind me, Satan!” (Matthew 16:23)

Ask, “If Michael did not dare rebuke Satan directly but Jesus both rebuked Satan and issued commands to him, doesn’t that show that Jesus is greater than Michael?

1 Thessalonians 4:16 says: “For the Lord himself will descend from heaven with a cry of command, with the archangel’s call, and with the sound of the trumpet of God. And the dead in Christ will rise first.” (RSV)

Although this doesn’t mention Michael by name, in Reasoning from the Scriptures (p. 218), the Watchtower comments as follows: “At 1 Thessalonians 4:16 (RS), the command of Jesus Christ for the resurrection to begin is described as “the archangel’s call,” and Jude 9 says that the archangel is Michael. Would it be appropriate to liken Jesus’ commanding call to that of someone lesser in authority? Reasonably, then, the archangel Michael is Jesus Christ. Interestingly, the expression “archangel” is never found in the plural in the Scriptures, thus implying that there is only one.)”

I recommend that you reply with the following questions:

Have you ever asked Jehovah’s Witnesses to go through the Bible verses about Michael with you? How did it go?