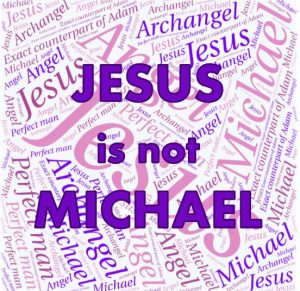 A recent Watchtower article entitled “Visions of Those in the Invisible Heavens” (The Watchtower No. 6 2016) contains the following quotation from the Revised New World Translation (2013):

“War broke out in heaven: Michael [Jesus Christ] and his angels battled with the dragon, and the dragon and its angels battled but they did not prevail, nor was a place found for them any longer in heaven. So down the great dragon was hurled, the original serpent, the one called Devil and Satan, who is misleading the entire inhabited earth; he was hurled down to the earth, and his angels were hurled down with him.”—Revelation 12:7-9.

Notice that by putting “Jesus Christ” in brackets after “Michael,” the Watchtower is asserting without proof that Jesus is the archangel Michael.

Because of this false teaching, Jehovah’s Witnesses don’t have a personal relationship with Christ. They don’t think such a thing is desirable or even possible. Opening their minds to the possibility that Jesus is more than what the Watchtower portrays him to be can be a major step in leading them out of that organization to a saving knowledge of the Lord.

If Jehovah’s Witnesses cite you Revelation 12:7-9, I recommend that you say something like this: “Michael and his angels defeat Satan and his angels. I see that, but I don’t see anything there that identifies Jesus with Michael.”

Let them try to prove to you a connection.

In its book Reasoning from the Scriptures (p. 218), the Watchtower argues as follows: “Revelation 12:7-12 says that Michael and his angels would war against Satan and hurl him and his wicked angels out of heaven in connection with the conferring of kingly authority on Christ. Jesus is later depicted as leading the armies of heaven in war against the nations of the world. (Rev. 19:11-16) Is it not reasonable that Jesus should also be the one to take action against the one he described as ‘ruler of this world,’ Satan the Devil? (John 12:31)”

If they make this argument, have them actually read aloud Revelation 19:11-16. In the Watchtower translation, it reads as follows:

“I saw heaven opened, and look! a white horse. And the one seated on it is called Faithful and True, and he judges and carries on war in righteousness. His eyes are a fiery flame, and on his head are many diadems. He has a name written that no one knows but he himself, and he is clothed with an outer garment stained with blood, and he is called by the name The Word of God. Also, the armies in heaven were following him on white horses, and they were clothed in white, clean, fine linen. And out of his mouth protrudes a sharp, long sword with which to strike the nations, and he will shepherd them with a rod of iron. Moreover, he treads the winepress of the fury of the wrath of God the Almighty. On his outer garment, yes, on his thigh, he has a name written, King of kings and Lord of lords.”

You can also point out that when John refers to Christ in Revelation, he describes him in much more exalted terms than he uses to describe Michael. In Revelation 12, Michael is not given any title, but in Revelation 19 Jesus wears a robe and is called “The Word of God” and “King of kings and Lord of lords.”

Ask, “Doesn’t this show that they are two different persons and that Jesus is more highly exalted in heaven than Michael?”

Have you ever had Jehovah’s Witnesses tell you that Jesus is Michael the archangel? Do you think asking them to prove this claim from the Scriptures would be helpful?

There was one time when Terry, a JW of many years, often came to visit. I did ask him ‘Does the Bible say that Jesus is Michael the Archangel?’ Eventually he had to admit and said ‘No’

When I get an opportunity I am planning on asking a JW about a question on their trolley: Who created the world?
My reply would be Michael the Archangel in accordance with who they believe Jesus is and John 1:3 & Colossians 1:16.
It would be interesting to see what their reply would be.

And in Isaiah 44:24, Jehovah says that he did these things all by himself. So who does that make Jesus?

Yes – who does that make Jesus? John 1:3 says the Word (Jesus) created ALL things. Heb1:10 here God the Father speaking to the Son acknowledges that in the beginning the Son laid the foundations of the earth and the heavens are the work of his (the Sons) hands. (Col 1:16) Gen 1:1 ‘In the beginning God created the heavens and the earth.’ So who is Jesus? Jesus is the creator and he is the God of the Old Testament Jehovah. (Isaiah 44:24) This does not take glory away from God the Father as this is His arrangement.