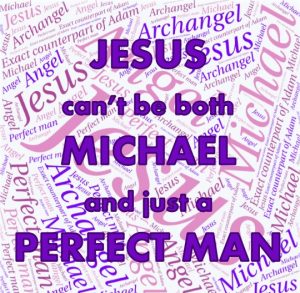 Although the Watchtower claims that Jesus is Michael the Archangel, in reality its claims about Jesus contradict each other.

The Watchtower does claim that Jesus is the archangel Michael, but it also teaches that because what Adam’s sin lost was a perfect human life, it took “a ransom equal in value to what was lost.” (What Does the Bible Really Teach? (Brooklyn: Watchtower Bible and Tract Society, 2005, 2014 printing), p. 50)

The Watchtower concludes, therefore, that Jesus was “a perfect man – nothing more, nothing less – and the exact counterpart of the once-perfect Adam…” ( The Watchtower, “Appreciating the Salvation of Our God,” 8/1/73, p. 465)”

Through a judicious use of questions, you can help the Witnesses see that these two Watchtower doctrines contradict each other.

Ask, “Do you believe that Jesus was Michael the archangel in human flesh or that when he was on earth he was just a man?”

This question puts them on the horns of a dilemma. If they tell you that Jesus was Michael in human flesh, then ask, “If Jesus was Michael on earth as a man, wouldn’t that mean that Jesus was far more than just a perfect man like Adam?” They should realize that this contradicts what the Watchtower teaches about the “ransom sacrifice.”

They may cite you Hebrews 2:17-18: “For this reason he had to be made like his brothers in every way, in order that he might become a merciful and faithful high priest in service to God, and that he might make atonement for the sins of the people. Because he himself suffered when he was tempted, he is able to help those who are being tempted.”

If that is what they tell you, say, “It sounds like you are saying that Michael was an archangel and not a man and that Jesus wasn’t an archangel but only a man like Adam. So then Jesus really wasn’t the archangel Michael, was he? Do you see why I’m confused?”

Have you asked Jehovah’s Witnesses to explain this contradiction in Watchtower teachings regarding the identity of Jesus? How did they respond?

Jesus Isn’t Michael: Jesus is Greater than Any Angel