Jesus Isn’t Michael: Jesus is Greater than Any Angel 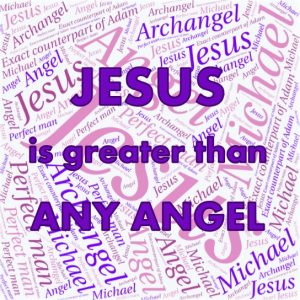 In claiming that Jesus Christ is also Michael the Archangel, the Watchtower ignores the fact that the book of Hebrews clearly teaches that Jesus is not one of the angels but is superior to them.

I recommend that you ask the Witnesses to look at these passage with you one-by-one.

Hebrews 1:2 says that God has appointed his Son “heir of all things” and tells us that it was through his Son that God created the world.

Ask, “How could an angel create the universe?”

Hebrews 1:3 proclaims Christ as the “radiance of God’s glory and the exact representation of his being.” It also says that Christ is “sustaining all things by his powerful word.”

Ask, “How could an angel sustain everything in the universe?”

Ask one of the Witnesses to read aloud Hebrews 1:4-5, which says of Christ, “So he became as much superior to the angels as the name he has inherited is superior to theirs. For to which of the angels did God ever say, ‘You are my Son; today I have become your Father’? Or again, ‘I will be his Father, and he will be my Son’?”

Hebrews 1:13-14 finishes the chapter, once again demonstrating that Christ is not an angel: “To which of the angels did God ever say, ‘Sit at my right hand until I make your enemies a footstool for your feet’? Are not all angels ministering spirits sent to serve those who will inherit salvation?”

Ask, “Doesn’t this passage show that Christ is not any sort of angel?”

Hebrews 2:5 says, “It is not to angels that he has subjected the world to come, about which we are speaking.”

Ask, “Doesn’t this verse show that Christ the king is not any kind of angel?”

Your goal in these discussions is to lead the Witnesses to see that Jesus is far more than any angel or archangel. Have you discussed these verses from Hebrews with the Witnesses? How did it go?

Witnessing to Jehovah’s Witnesses in Love: Prepare Your Heart

1 Comment on "Jesus Isn’t Michael: Jesus is Greater than Any Angel"