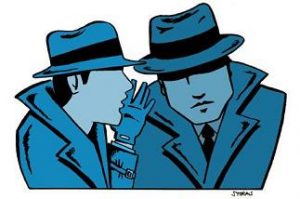 Not surprisingly, given the legalistic environment of the Watchtower, a Jehovah’s Witness who becomes aware of “serious wrongdoing” on the part of another Witness is supposed to make sure that the congregation elders are or become aware of it.

When elders learn about serious wrongdoing, they approach the individual involved to give needed help and correction. It is the elders’ responsibility to judge such ones inside the Christian congregation. Keeping a close watch on its spiritual condition, they assist and admonish anyone who is taking an unwise or wrong step…

But what if you are not an elder and you come to know about some serious wrongdoing on the part of another Christian? Guidelines are found in the Law that Jehovah gave to the nation of Israel. The Law stated that if a person was a witness to apostate acts, sedition, murder, or certain other serious crimes, it was his responsibility to report it and to testify to what he knew. Leviticus 5:1 states: ‘Now in case a soul sins in that he has heard public cursing and he is a witness or he has seen it or has come to know of it, if he does not report it, then he must answer for his error…’

Though not under the Mosaic Law, Christians today can be guided by the principles behind it.[1]

If a Witness hasn’t actually seen the wrongdoing firsthand or heard the wrongdoer admit to it, what should they do?

One option is “to go directly to the elders. It is not wrong to do so.”[2]

However, usually the better choice is to approach the person to make sure of your facts and to see if the elders are already handling the matter. “If there remains reason to believe that a serious wrong has been committed, encourage him or her to approach the elders for help, and explain the wisdom of doing so. Do not talk to others about the matter, for that would be gossip.”[3]

In other words, you should encourage the wrongdoer to turn himself in.

“If the person does not report to the elders within a reasonable period of time, then you should. One or two elders will then discuss the matter with the accused. The elders need to ‘search and investigate and inquire thoroughly to see if wrong has been done. If it has, they will handle the case according to Scriptural guidelines.”[4]

“Why do some who have fallen into gross sin hold back from approaching the congregation elders? Often it is because they are not aware of the benefits of going to the elders. Some incorrectly believe that if they confess, their sin will be exposed to the entire congregation.”[5]

Of course, they may be right. They may be disfellowshipped!

But, according to the Watchtower, if your informing on them leads to the person being disfellowshipped, you will have helped keep Jehovah’s organization clean. Informing on other Witnesses this way is “in line with our desire always to do what is correct and loyal.”[6]

That’s the Watchtower’s way of saying that if you don’t inform on them, you are being disloyal to God and to his organization.

What should you report to the elders? Isn’t all sin serious?

“What if we become aware that someone is involved in a secret sin, perhaps abusing alcohol, viewing pornography, or living an immoral life? (Eph. 5:11, 12) Our turning a blind eye to gross wrongdoing can hinder the free flow of Jehovah’s holy spirit and threaten the peace of the entire congregation.”[7]

Apparently, there is no room in the Watchtower system for one Witness confiding in another, seeking help and prayer, and keeping the matter between the two of them.

What if the offender is a member of your own family?

According to the elders’ manual, failure to report to the elders wrongdoing on the part of one’s own family members can disqualify a man from serving as an elder or ministerial servant: “When he became aware of serious wrongdoing, did he promptly inform the body of elders so that they could properly investigate the matter? Did he shield his family from discipline or try to manipulate the elders’ handling of the situation?”[8]

Although you or I might see all of this as creating a legalistic and oppressive religious environment, the Watchtower organization portrays it as the exact opposite. In fact, they see it as part of the way Witnesses “preserve the positive spirit of the congregation.”[9]

How wrong and hurtful it is to spread confidential information about someone! Even so, when serious sin has been committed, those Scripturally obligated to handle the matter—the elders in the congregation—should be informed. (Read Leviticus 5:1.) So if we know that a brother or a sister has fallen into such wrongdoing, we should encourage that one to approach the elders and seek their help… If he or she does not do so within a reasonable period of time, though, we should report the wrongdoing.

I encourage you to have compassion for people who live under such a “spiritual haven” and to be prepared to share with them the gospel of grace. Help them see the depth of forgiveness and cleansing offered to them by the Lord Jesus Christ.