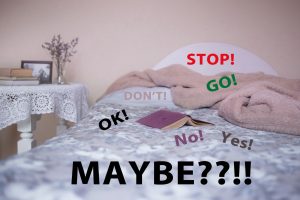 After nearly six years of threatening married Jehovah’s Witnesses with disfellowshipping if they engaged in “repugnant” and “unnatural” sexual practices, the Watchtower relented—sort of…

The Governing Body received considerable correspondence from Witnesses requesting clarification. Ray Franz noted that one female Jehovah’s Witness “wrote, saying that she and her husband loved each other deeply and then she described the ‘certain type of foreplay’ they were accustomed to, stating ‘I believe it’s a matter of conscience but I am writing you to be sure.’”[1]

A male Witness who had become impotent as a result of surgery wrote to ask if there wasn’t some loophole that would apply in his situation so that he could still please his wife.[2]

He noted, “An unprecedented volume of mail came in over a period of five years, most of it questioning the Scriptural basis for the Governing Body inserting themselves into the private lives of others in such a way, and expressing inability to see the validity of the argument advanced in print to support the stand taken.”[4]

One courageous elder wrote the Governing Body to point out that in Leviticus 18, Jehovah had gone into great detail on sexual behavior. “Why,” he asked, “is there no statement made to married couples as to acceptable or unacceptable forms of copulation?”[5] He went on to say that he wanted to enforce Bible laws “not because I have come to take it for granted that this is Jehovah’s organization… but… because I truly believe it to be scripturally proven and correct.”[6]

Because of all this, in 1978 the Governing Body changed course. A new Watchtower article stated:

It must be acknowledged that the Bible does not give any specific rules or limitations as regards the manner in which husband and wife engage in sexual relations… we cannot do more than counsel in harmony with what the Bible does say. In the past some comments have appeared in this magazine in connection with certain unusual sex practices, such as oral sex, within marriage and these were equated with gross sexual immorality. On this basis the conclusion was reached that those engaging in such sex practices were subject to disfellowshiping if unrepentant. The view was taken that it was within the authority of congregational elders to investigate and act in a judicial capacity regarding such practices in the conjugal relationship. A careful further weighing of this matter, however, convinces us that, in view of the absence of clear Scriptural instruction, these are matters for which the married couple themselves must bear the responsibility before God and that these marital intimacies do not come within the province of the congregational elders to attempt to control nor to take disfellowshiping action with such matters as the sole basis.[7]

Nevertheless, the Watchtower leadership still experienced conflict over how to view these matters of conscience and how much control to exercise.

In a 1983 article, the Watchtower stated:

It is not for the elders to pry into the intimate lives of married Christians. However, the Bible certainly enters into their lives… Those who would ‘keep walking by spirit’ should not ignore the Scriptural indications of God’s thinking. And they will do well to cultivate a hatred for everything that is unclean before Jehovah, including what are clearly perverted sexual practices. Married couples should act in a way that will leave them with a clean conscience, as they give unimpeded attention to developing ‘the fruitage of the spirit’…

As already stated, it is not for elders to ‘police’ the private marital matters of couples in the congregation. However, if it becomes known that a member of the congregation is practicing or openly advocating perverted sex relations within the marriage bond, that one certainly would not be irreprehensible, and so would not be acceptable for special privileges, such as serving as an elder, a ministerial servant or a pioneer. Such practice and advocacy could even lead to expulsion from the congregation.[8]

On the other hand, if it becomes known that a Witness is practicing or advocating such “perverted sex relations” within the marriage bond, that person would not be eligible to hold important congregational office and could even lead to expulsion from the congregation, which is disfellowshipping.

Most of you know that I served as a trial judge for more than 10 of years, so I am experienced at interpreting laws, regulations, and the rulings of higher courts. Nevertheless, I still marvel at the legalism of the Watchtower organization. If I were a Jehovah’s Witness elder, I would have a difficult time understanding what they mean and what I was or was not supposed to do when faced with issues such as these.

Turn Yourself In to Watchtower Elders