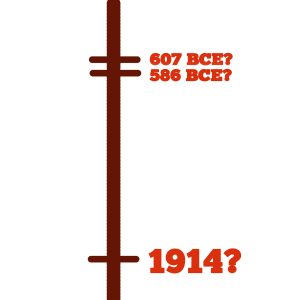 The Watchtower claims that the “Gentile Times” ended and Jesus received rulership authority from Jehovah in 1914.

The 1914 date is critical to the Watchtower’s claim that its leadership is the “faithful and discreet slave” spoken of by Jesus in Matthew 24:45.

Here’s how to challenge the Watchtower’s chronology using only Watchtower literature.

As I noted in the previous post, it arrives at 1914 by the following means[1]:

In addition to the challenge from the Bible I discussed last time, you can also challenge the Watchtower’s claim that Jerusalem fell to Babylon in 607 BCE. Actually, that occurred in 587/586 BCE, some 20 years later.

Jehovah’s Witnesses will trust the Watchtower over secular historians, so we will come up with a soundbite to cause them to question the 607 BCE date using only one Watchtower book.

You can comment with this soundbite: “By the internals of the Watchtower’s own Babylonian royal calendar, Jerusalem fell in 586 BCE, not 607 BCE. If so, the 1914 date is wrong.”

Here is how you can show this to them.

The 1988 Watchtower book, Insight on the Scriptures, Volume 2, discusses Babylonian chronology. While it gives dates for the Babylonian kings that support its 607 BCE date, the internals of the article don’t match. In fact, they support the 586 BCE date.

Here’s how to show it to them. Page references are all to Insight, Volume 2.

P. 480   The fall of Jerusalem occurred in Nebuchadnezzar’s 19th year.

Jehovah’s Witnesses will point out that the article you quoted gives the 607 BCE date, and they will present you with all sorts of arguments in support of that date.

The fact remains that the internals of the Watchtower’s own Babylonian regnal chronology don’t match.

For this reason, you can keep coming back to your soundbite and referring them to the internals of the Watchtower’s own Babylonian regnal list and ask for their explanation.

This discrepancy should trouble sincere Witnesses long after your conversation has ended.

Have you ever challenged the Watchtower’s 1914 claims? Do you think this approach would help?

Challenging 1914 from the Bible