Challenging 1914 from the Bible 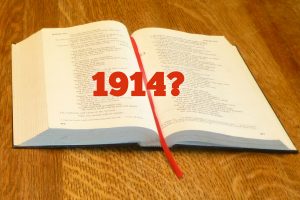 The Watchtower claims that the “Gentile Times” ended and Jesus received rulership authority from Jehovah in 1914.

It would be hard to overstate the importance of this assertion to the Watchtower’s claim to be Jehovah’s one true organization on the earth today.

The 1914 date is critical to the Watchtower’s claim that its leadership is the “faithful and discreet slave” spoken of by Jesus in Matthew 24:45.

Where did they get this date and how can we refute it?

The Watchtower arrives at 1914 by the following means[1]:

According to the Watchtower, “What happened at that time? Jehovah entrusted rulership over mankind to his own Son, Jesus Christ, glorified in the heavens—Dan. 7:13-14).”[4]

Obviously, all this involves a great deal of Bible hopscotching, speculation, and convoluted reasoning, but Jehovah’s Witnesses firmly believe it is accurate. Not only so, but they also believe that those of us outside the Watchtower organization are in darkness because we don’t understand the significance of the dates which Jehovah has revealed through these scriptures.

How can we get Jehovah’s Witnesses to question all this without getting bogged down in a morass of historical data and complicated reasoning?

There are two soundbite replies I would recommend, centered on just two scripture verses.

Matthew 28:18: “Jesus approached and spoke to them, saying: ‘All authority has been given me in heaven and on the earth.’”

Ask, “According to this verse, did Jesus have to wait until 1914 to receive rulership authority over mankind or had all authority in heaven and on earth already been given to him by the time he said this to his disciples?”

Colossians 1:13: “He rescued us from the authority of the darkness and transferred us into the kingdom of his beloved Son…”

Ask, “According to this verse, was Jesus’ kingdom going to wait 1900 years to begin or had first century Christians already been transferred into it?”

Have you ever challenged the Watchtower’s 1914 claims? How did it go? Do you think these soundbites could help?

2 Comments on "Challenging 1914 from the Bible"

IF it’s true that Nebuchadnezzar destroyed Jerusalem at around October 1 of 607BCE, and it is true that something special also happened at around October 1 of 1914, then Jehovah’s witnesses should be the one and only true religion which saw it. We should pay our attention to them with positive attitude. Because when Jesus flew to heaven, PSALMS 110:1-3 says that he should stay there at his Father’s right hand waiting for kingdom.

Those are some pretty big ifs. In fact, Nebuchadnezzar destroyed Jerusalem in 587-586 BC, not in 607 BC. Likewise, nothing verifiable occurred in heaven around October 1, 1914, and the Watchtower has substantially changed its teachings about what would or did happen in 1914. Psalms 110:1-3 was an Old Testament statement from the Father to the Son. It isn’t tied to a date.