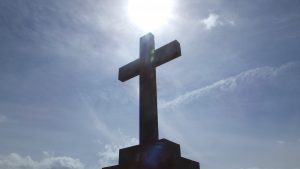 Jehovah’s Witnesses often go to great lengths to try to prove to us that Jesus died on a single, upright “torture stake” rather than on a traditional cross.

I don’t think most of us care about the shape of the instrument on which he died.

However, because the Watchtower attacks Christians over this issue and has convinced Witnesses that this is an issue which distinguishes authentic and false Christianity, the Holy Spirit may lead you to engage them on this topic.

Sometimes, that’s a good way to defend your faith, shake the Jehovah’s Witnesses’ confidence in the Watchtower organization, and redirect their thinking toward Jesus and what he did on the cross.

The Watchtower makes the following arguments[i]:

Most of the time I choose to avoid haggling over the shape of the instrument on which Jesus was impaled. I am content to call it a “torture stake” and focus the Witnesses’ attention on which it represents to genuine Christians.

I let Jehovah’s Witnesses make out their case. Somewhere in the conversation, they will present the following Watchtower soundbite argument:

How would you feel if one of your dearest friends was executed on the basis of false charges? Would you make a replica of the instrument of execution? Would you cherish it, or would you rather shun it?[ii]

At that point, I recommend that you answer with some soundbites of your own.

You can introduce them by saying, “That’s an interesting point. Let’s open our Bibles and see what Paul has to say about the torture stake.” Let them read the verses aloud from the Watchtower’s New World Translation.

Scripture #1: Philippians 3:18-19: “For there are many—I used to mention them often but now I mention them also with weeping—who are walking as enemies of the torture stake of the Christ. Their end is destruction, and their god is their belly, and their glory is really their shame, and they have their minds on earthly things.”

Ask these questions one at a time:

They should have difficulty answering.

After you have discussed that verse, you can move on to a second passage.

Scripture #2: 1 Corinthians 1:17-18: “For Christ sent me, not to baptize, but to declare the good news, and not with wisdom of speech, so that the torture stake of the Christ should not be made useless. For the speech about the torture stake is foolishness to those who are perishing, but to us who are being saved it is God’s power.”

After they have wrestled with those issues, you can move on to a final verse.

Scripture #3:  Galatians 6:14: “But may I never boast, except in the torture stake of our Lord Jesus Christ, through whom the world has been put to death with regard to me and I with regard to the world.”

You can sum up the entire discussion with these soundbite questions:

You can end the discussion there, leaving them to ponder the final question.

Have you ever discussed the cross with Jehovah’s Witnesses? How did it go? Do you think these soundbites could help?

[ii] Reasoning from the Scriptures, p. 92