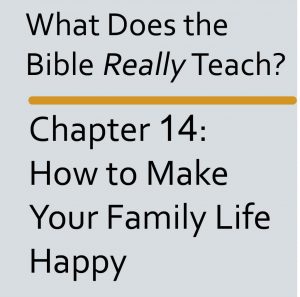 In contrast to earlier chapters which dealt with the identity of Jesus, the Watchtower’s “sovereignty challenge” view of life, and the like, Chapter 14—“How to Make Your Family Life Happy—isn’t heavy on doctrine.

Accordingly, my primary goal is to get the Witnesses to think outside the Watchtower box.

For example, paragraph 2 (p. 134) states, “Family happiness depends mainly on our recognizing that the family originates with Jehovah…”

Witnesses are trained to agree with whatever the Watchtower says without asking questions, so I would challenge that Watchtower assertion by asking, “Is that claiming that people of other religions—or even atheists—never have happy family lives?”

Their answer isn’t as important as the fact that they have had to consider the question.

Paragraph 3 (p. 135) says that the creation account in Genesis is “not just a story or a myth.” As Christians, we can build bridges with the Witnesses—and perhaps surprise them—by telling them that we agree.

Where do we get the ability to live like Jesus?

Paragraph 4 (p. 135) says, “…by learning about the love that Jesus showed and following his example, each one of us can help to make family life happier.”

Paragraph 5 (p. 135) says that husbands should treat their wives as Christ treated his disciples.

Paragraph 6 (p. 136) says that husbands and wives should forgive one another.

None of that is controversial to Christians, but the question I would ask is, “How do people who inherited a sinful nature obtain the ability to live like Jesus?”

This provides an opportunity for you to cover the section of my book entitled, “The New Birth Provides an Inner Transformation” (The New Birth Approach from my book, Getting Through to Jehovah’s Witnesses: Approaching Bible Discussions in Unexpected Ways, pp. 131-133).

How deeply you should go into that subject will depend on how much you have been able to get across in your previous new birth discussions.

What makes us precious to God?

Referring to 1 Peter 3:7, paragraph 7 (p. 136) describes women as being “a weaker vessel.” I would ask the Witnesses to explain their understanding of this. In what sense are women weaker than men and in what sense are they not? Do women tend to be stronger than men in some ways?

The goal isn’t to get embroiled in a controversy. Rather, it’s to get them to do their own thinking about what the Bible means.

Paragraph 7 (p. 136) also states, “Husbands should remember that it is faithfulness, not whether a person is male or female, that makes one precious to God.”

I would ask, “Do you believe that sinful people or wavering people are not precious to God?”

In this regard, draw their attention to several passages in Luke and ask for their comments:

Paragraph 8 (p. 137) says that spouses need to maintain sexual fidelity to one another, and paragraph 9 (p. 137) says that husbands should show tender affection for their wives. There’s nothing controversial for Christians in those two statements. We can simply agree with that and move on.

Is the family really an organization?

Even if you believe the Bible’s teachings on male headship are intended to be cultural rather than universal, I think it is more fruitful to question the assertion that families are organizations.

The Bible doesn’t contain the word “organization,” so ask the Witnesses to explain in what sense their own families are organizations rather than interrelationships among people.

Paragraph 12 (p. 138) states, “Whether her husband is a fellow believer or not, a wife is not showing disrespect if she tactfully expresses an opinion that differs from his… [That’s nice to know!]…Of course, when a husband makes a final decision that does not conflict with God’s law, his wife shows her subjection by supporting it.”

I would ask the Witnesses to give specific examples of how this has worked in their own families.

The goal is to get them to think about actual applications of the teachings rather than just repeating them.

Paragraph 13 (p. 139) states, “…only sexual immorality by one of the marriage mates provides Scriptural grounds for divorce.”

I would ask, “How does a spouse prove sexual immorality if the other spouse doesn’t admit to it?”

In fact, the Watchtower has all sorts of rules about this.

Elders have been known to surveil congregation members to see if members of the opposite sex stay overnight. If the Witnesses reveal this practice to you, I would ask, “Why not just leave compliance with this requirement as a matter between the spouses and Jehovah rather requiring elders to intervene and be detectives?”

With regard to the treatment of children, paragraph 14 (p. 139) says, “They need, not small bits of your time, but large amounts of it. You need to take time to teach them, for that is what Jehovah instructs parents to do.”

Ask how this affects their involvement in extra-curricular activities at school such as sports. Also ask if their children have encountered conflict or hazing because they don’t celebrate birthdays or holidays with the rest of their class.

In reality, Jehovah’s Witness children usually have to begin door-to-door witnessing very young (some as young as 4), and Witness children are not usually allowed to participate in sports or holiday activities at school.

If the Witnesses tell you something different, don’t argue with them. Just pray silently that the Holy Spirit will use your questions to show them that the reality doesn’t match the happy image the Watchtower projects.

Next week, we’ll look at a timely topic—the Watchtower and child predators.