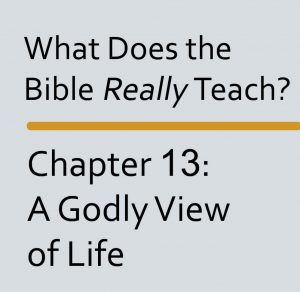 Under the heading, “Showing Respect for Blood,” paragraphs 10-16 (pp. 128-131) of “Bible Teach,” Chapter 13, set out the Watchtower’s scriptural arguments in support of its ban on blood transfusions.

This is the point at which I recommend that you use The Life and Death Issues Approach from my book, Getting Through to Jehovah’s Witnesses: Approaching Bible Discussions in Unexpected Ways.

That approach deals with this subject in two ways.

First, it shows how you can challenge the Watchtower’s blood transfusion ban on historical grounds. Pages 268-274 document total Watchtower reversals on the subjects of whether vaccinations and organ transplants are prohibited by God’s law. It also shows changes the Watchtower has made since 2000 regarding the acceptability of taking blood fractions.

It recommends (p. 274) that—after documenting these radical changes to Jehovah’s Witnesses—you follow up by saying:

Second, The Life and Death Issues Approach (pp. 275-278) shows you how you can challenge the Watchtower’s blood transfusion ban on scriptural grounds.

Paragraph 10 (pp. 128-129 discusses “the connection between life and blood.” It states, “When God spoke of Abel’s blood, he was speaking of Abel’s life… The connection between life and blood was again shown after the Flood of Noah’s day. Before the Flood, humans ate only fruits, vegetables, grains, and nuts. After the Flood, Jehovah told Noah and his sons: ‘Every moving animal that is alive may serve as food for you.’ However, God set this restriction: ‘Only flesh with its life—its blood—you must not eat.’ (Genesis 1:19; 9:3,4) Clearly, Jehovah links very closely the life and the blood of a creature.”

Tell the Witnesses that the emphasis on the connection between life and blood reminds you that paragraphs 3-4 of this chapter commented that the Mosaic law’s prohibition of murder “…showed the Israelites that God values human life and that people must value the lives of others.”

Establish the fact that blood wouldn’t be important to God except for the connection it has to animal and human life.

Paragraph 12 (p. 129) claims that Acts 15:28, 29 and 21:25 make the ban on eating blood applicable to Christians. As I said in The Life and Death Issues Approach (p. 276), you should show the Witnesses that the reason for the instructions given in Acts 15 regarding things strangled and blood was to avoid offending Jews. Acts 15:21 says, “For from ancient times Moses has had those who preach him in city after city, because he is read aloud in the synagogues on every sabbath.”

Then tell them you are confused as to why they think that this prohibition applies to people taking blood transfusions for life-saving medical purposes.

They will respond with what “Bible Teach” says in paragraph 13 (p. 130): “Suppose a doctor were to tell you to abstain from alcoholic beverages. Would that simply mean that you should not drink alcohol but that you could have it injected into your veins? Of course not! Likewise, abstaining from blood means not taking it into our bodies at all. So the command to abstain from blood means that we would not allow anyone to transfuse blood into our veins.”

There is an accompanying photo in the book showing a person ingesting alcohol intravenously. The accompanying caption reads, “If your doctor told you to abstain from alcohol, would you have it injected into your veins?”

I would reply, “I think that hypothetical is absurd, but if the doctor later told me that I had a serious medical condition that required me to take alcohol intravenously or die, I would follow his advice.”

On page 277 of The Life and Death Issues Approach, I recommend a more complete response:

Isn’t there a big difference between drinking blood for nourishment and taking donated blood to replace blood you have lost? Whether you take alcohol or a medication orally or intravenously, it serves exactly the same purpose. But while blood taken by mouth is broken down and used for nourishment just like any other food, blood taken intravenously acts completely differently. It is not food but rather a transport medium, moving oxygen, nutrients, and chemicals and cells to fight infection and heal wounds. That’s just fulfilling blood’s designed purpose, isn’t it?

Besides, how could the Bible have been referring to this lifesaving medical procedure of blood transfusion, given that it didn’t even become possible until thousands of years after the Bible was written?

The Witnesses will tell you that a Christian should choose to die rather than to violate God’s command against “eating blood.”

Paragraph 15 (pp. 130-131) asks, “Would a Christian break God’s law just to stay alive a little longer in this system of things? Jesus said: “Whoever wants to save his life will lose it, but whoever loses his life for my sake will find it.” (Matthew 16:25) We do not want to die. But if we tried to save our present life by breaking God’s law, we would be in danger of losing everlasting life. We are wise, then, to put our trust in the rightness of God’s law, with full confidence that if we die from any cause, our Life-Giver will remember us in the resurrection and restore to us the precious gift of life.”

At this juncture, I would remind the Witnesses that this chapter has stated many times that Jehovah views blood as important because of its connection with the life of the creature. So it’s the life that’s of primary importance, not the blood. The blood is only important because it represents and sustains life.

You can remind them of Jesus’ condemnation of the Pharisees’ legalism by reminding them of God’s laws’ priorities. Take them to Matthew 23, where he rhetorically asked them which is greater:

Remind them that in verse 24 Jesus rebuked them by saying, “Blind guides, who strain out the gnat but gulp down the camel!”

Ask, “How does allowing a human being to die for lack of donated blood (which didn’t harm the donor at all) show respect for life?”

Then, as I said on p. 277 of The Life and Death Issues Approach, ask the Witnesses these summary questions:

Paragraph 17 (pp. 131-133) states that in the Mosaic Law, there was only one proper use of blood—to make the atoning animal sacrifices.

I would reply that there was another proper use of blood which Jehovah built into his creatures—the sustaining of life itself.

Paragraph 18 (pp. 132-133) acknowledges that Christians are not under the Mosaic Law regarding animal sacrifices but stresses the importance of Christ’s shed blood to our salvation.

Although this chapter doesn’t follow up on this point, as I noted on pp. 277-278 of The Life and Death Issues Approach, Witnesses may make the argument that the Watchtower has put forth in one of its other books: “…disregard for the requirement that Christians ‘abstain from blood’ would be an evidence of gross disrespect for the ransom sacrifice of Jesus Christ. (Lev. 17:11, 12; Heb. 9:11-14, 22)”[1]

If the Witnesses make that argument, ask them to show you in the Scriptures where it says that saving a life by means of a blood transfusion is grossly disrespectful of Christ’s sacrifice.

In fact, it was Jesus himself who was distraught by the Pharisees’ legalistic view of Bible commandments. In Mark 3:4, before healing a man’s hand on the Sabbath, he asked them, “Which is lawful on the Sabbath: to do good or to do evil, to save life or to kill?”

Mark 3:5 tells us Jesus’ reaction when they remained silent: “After looking around at them with indignation, being thoroughly grieved at the insensibility of their hearts, he said to the man: ‘Stretch out your hand.’ And he stretched it out, and his hand was restored.”

You can point out that Jesus deliberately did this on the Sabbath even though there doesn’t seem to be any reason why he couldn’t have waited until the next day. His point was to demonstrate God’s priorities.

Ask, “Given Jesus’ question to the Pharisees concerning the need for the Sabbath restrictions to give way in order to heal or to save a life and his indignation at the Pharisees’ legalistic hardness of heart, what would his attitude be toward religious authorities who require people to die in order to ‘abstain from blood’ in order to uphold the sanctity of life rather than actually allowing them to accept a life-saving blood transfusion?”

Next week, we will move on to “Bible Teach” Chapter 14—“How to Make Your Family Life Happy.”

The Flesh Can’t Cure the Flesh

2 Comments on "The Blood Transfusion Ban"

Oh my goodness David. I just came across your website. I’ve bookmarked it on my phone. I spent 24 years a slave of the watchtower. I hope you don’t mind if I use your reasoning on an apologetic Reddit forum targetting current and past witnesses?

If you find anything I’ve said helpful, feel free to use it. Please let me know how it goes.