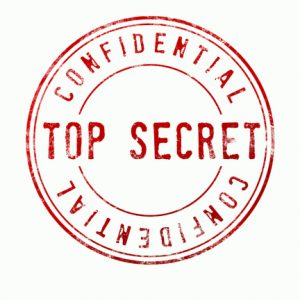 The previous blog series gave an overview of the Watchtower’s judicial system.

In this series, I will highlight a number of problems with the way this judicial process operates.

The Watchtower has stated: “Jehovah’s Witnesses are in no sense a secret society. Their Bible-based beliefs are fully explained in publications that are available to anyone. Additionally, they put forth special effort to invite the public to attend meetings to see and hear for themselves what takes place.”[1]

Despite these claims, there are a number of secret aspects to the Watchtower religion. In this post, I’ll discuss two of them.

The elders’ manual, Shepherd the Flock of God, was distributed to elders with great secrecy. Most Jehovah’s Witnesses don’t know it exists. Elders are often shocked when they discover that someone has put a copy of the book onto the internet.

Paragraph 3 of the manual’s introduction states: “This publication is copyrighted and confidential. It is issued to each appointed elder. If an elder is deleted for reasons other than moving to another congregation with a favorable recommendation, he should turn over this publication to the Congregation Service Committee to be destroyed, and any electronic copies in his possession should be deleted.”[2]

It is impossible to know why the Watchtower organization—an organization which has stated, “True religion in no way practices secretiveness”[3]—feels the need to try to keep its elders’ manual secret. However, the manual does contain provisions Jehovah’s Witnesses might find difficult to accept.

One such provision involves disfellowshipping offenses committed by elders themselves.

However, if they have committed immorality or other serious wrongdoing and successfully covered it up, when it comes to light their status needs to be reviewed by the other elders, but they don’t necessarily have to be removed from office.

Committed a Disfellowshipping Oﬀense Years in the Past and the Matter Was Never Addressed: The body of elders may determine he can continue to serve if the following is true: The immorality or other serious wrongdoing occurred more than a few years ago, and he is genuinely repentant, recognizing that he should have come forward immediately when he sinned. (Perhaps he has even confessed to his sin, seeking help with his guilty conscience.) He has been serving faithfully for many years, has evidence of God’s blessing, and has the respect of the congregation.[4]

This provision seems strange, given the fact that one of the main reason he would have “the respect of the congregation” is that they were unaware of the immorality or serious wrongdoing he successfully hid from them for “more than a few years”! How would the elders be likely to treat an ordinary member of the congregation who had committed a disfellowshipping offense and then covered it up for many years?

It seems to be a strange loophole—even a serious double standard—especially given the extent to which the Watchtower presents itself to its members and to the public as an organization which has high moral standards, one that deals forthrightly with sin rather than sweeping it under the rug.[5]