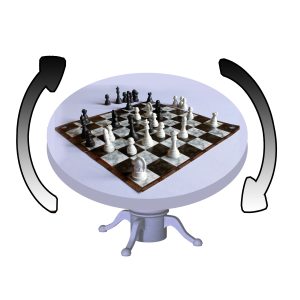 Many times you can use a combination of witnessing techniques.

Here’s an example of how you can combine taking the wind out of their sails with Student Role Teaching to turn the tables when discussing the biblical relationship of faith and works.

The usual interaction between Christians and Jehovah’s Witnesses regarding faith and works follows a completely predictable and fruitless pattern.

The Christian cites verses from Paul which teach that salvation is by grace through faith apart from works.

The Witnesses immediately counter with James 2:26: “…faith without works is dead…” That verse is almost a mantra to them.

Back and forth the discussion goes, and the Christian doesn’t get through to them.

Step #1: Take the wind out of their sails.

Bring up James 2:26 first yourself.

Acknowledge up front the importance of good works, obedience, and godly behavior in the Christian life.

Decry the false Christianity that says godliness is unimportant.

By starting this way, you will correct many of the Witnesses’ false views of what justification by faith is all about.

Begin by saying something like this: “I’d like to talk with you about the role of faith and works in the Christian life. I want to start by saying that I believe what James 2:26 says, that faith without works is dead. So if a person says, ‘I’m saved! I’m saved!’ but then he runs off and gets drunk and cheats on his wife, that isn’t biblical Christianity. When I read about preachers who talk about Jesus one day and hire prostitutes the next, I’m just as appalled at that as you are. When someone tells me, ‘I’m saved!’ but then he sits back in his easy chair and lives a self-absorbed life and never shows any concern for his neighbors, that’s not biblical Christianity.”

Step #2: Use Student Role Teaching to Turn the Tables.

I recommend this sort of transition: “So I do believe that works are an important part of the Christian life. But, you know, Paul says some things in Romans about the relationship of faith and works that I find hard to reconcile with what James says. I wonder if we could look at some of those verses together. I’d really like to get your take on them.”

Christian: The first passage I’d like to ask you about is Romans 4:1-8. I’d like to ask you read that aloud from your Bible and I’ll want to ask questions as we go along because I really want to hear your understanding of Paul’s teaching point-by-point.

Could you please start by reading verses 1 and 2?

Jehovah’s Witness: That being so, what will we say was gained by Abraham, our forefather according to the flesh? 2 For instance, if Abraham was declared righteous as a result of works, he would have reason to boast, but not with God.”

Christian: Now according to that, did God declare Abraham righteous as a result of his works?

Jehovah’s Witness:  Well, Paul emphasizes the importance of faith but James 2:21 says that Abraham was declared righteous by works when he offered Isaac on the altar.

Christian: That’s a great point and I do want to discuss that with you a little later, but right now I’d like to concentrate on what Paul says to make sure I understand what Paul is trying to get across. Then I’ll be happy to look at what James says because I know God’s Word doesn’t contradict itself. Can we go on to verse 3?

Jehovah’s Witness: Romans 4:3: “For what does the scripture say? “Abraham put faith in Jehovah, and it was counted to him as righteousness.”

Christian: When did that happen and what exactly did Abraham have faith in?

Jehovah’s Witness: I have a chain reference in my Bible that says it’s referring to Genesis 15, where Abraham first believed Jehovah’s promise that he would have a son.

Christian: I would agree with that… Now let’s go on to verses 4 and 5.

Jehovah’s Witness: Now to the man who works, his pay is not counted as an undeserved kindness but as something owed to him. On the other hand, to the man who does not work but puts faith in the One who declares the ungodly one righteous, his faith is counted as righteousness.”

Christian: What point is Paul making about the difference between the man who works (verse 4) and the man who does not work (verse 5)?

Jehovah’s Witness: Well, he says a man who obtains something by his works isn’t receiving a gift. He is entitled to what he receives; they are wages he has earned.

Christian: Right. Now… in verse 5 there, is God declaring this man who doesn’t work righteous or unrighteous?

Christian: So he’s declared righteous despite the fact that he does not work? Am I understanding that right?

Jehovah’s Witness: That’s what it says.

Christian: Why would Jehovah declare an ungodly man—a man who doesn’t work—righteous?”

Jehovah’s Witness: Paul says it’s because of his faith.

Christian: So this man doesn’t work and he’s ungodly, but nevertheless Jehovah declares him righteous because of his faith?

Jehovah’s Witness: That’s what it says.

Christian: Well, if Jehovah has declared him righteous, is he righteous or is he unrighteous?

Jehovah’s Witness: I guess so…

Do you see how you’ve turned the tables?

Instead of you citing Paul and getting in an argument with the Witnesses, they are the ones reading out Paul’s words and defending and explaining them to you.

Whenever the Witnesses try to steer the discussion toward the importance of works, instead of arguing with them, you can agree that God calls Christians to abandon immorality and to do good works.

Then steer the conversation back to Paul’s statements which say that these works—though important—have nothing whatever to do with saving us.

They are the products of salvation, not the prerequisites to salvation.

For a more detailed discussion of this method, see Chapter 8, “The Faith and Works Approach,” of my book, Getting Through to Jehovah’s Witnesses: Approaching Bible Discussions in Unexpected Ways.

2 Comments on "Turning the Tables"

I love this approach! I am about to meet someone who is studying with JWs. My intention is to point him to the true gospel as opposed to the WT false gospel. If the subject of works comes up I will use these reasonings and scriptures! Thank you! ( I will you know how it goes )

The text of Faith without Works is easier to illustrate than it is to explain. The idea that someone can ‘claim’ to be a Christian and yet talk about their online betting and swear like a long-shoreman when their favorite sports team loses a game…NOT Christian behavior. Also the fruit of the Spirit isn’t something a Christian has to ‘try’ for. No more than an apple tree has to try to produce apples. The Holy Spirit will bring these fruits of love, joy, peace, patience naturally. That wouldn’t be as easy to illustrate, though. I watched another video where a… Read more »
Reply   -   Share