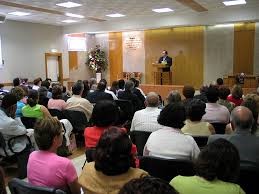 We need to know what they believe and why.

We need to understand how our words might be misconstrued so we can avoid those pitfalls.

Let’s see how this works when it comes to the matter of calling God “Jehovah.”

To a Jehovah’s Witnesses, this is of supreme importance. They believe it is one of the things that distinguishes true Christianity (the Watchtower religion) from all the counterfeits.

A friend of mine noticed what appears to be a contradiction in the Watchtower’s rendering of Genesis 28:13 and its rendering of Exodus 6:2-3.

Speaking to Jacob in Genesis 28:13, God said (NWT), “I am Jehovah the God of Abraham your father and the God of Isaac. The land on which you are lying, to you I am going to give it and to your offspring.”

Exodus 6:2-3 (NWT) Then God said to Moses: “I am Jehovah. And I used to appear to Abraham, Isaac, and Jacob as God Almighty, but with regard to my name Jehovah I did not make myself known to them.

She thought pointing this out to Jehovah’s Witnesses would prove to them that there was a serious error in the Watchtower’s translation.

But Jehovah’s Witnesses wouldn’t see it that way.

They would misconstrue her argument by thinking she was trying to discredit the Bible itself by claiming that it contradicts itself.

I suggested instead that she focus on what “making a name known” means in a biblical context, because that is what resolves the apparent contradiction.

It helps us greatly to know that the Watchtower teaches Jehovah’s Witnesses to make the following points:

Jesus declared in prayer to his Father: “I have made your name known… and will make it known.” (John 17:26) Jesus would undoubtedly have pronounced God’s name on numerous occasions when he read, quoted, or explained portions of the Hebrew Scriptures containing that important name. Jesus would thus have used God’s name just as freely as all the prophets did before him. If any Jews were already avoiding the use of God’s name during the time of Jesus’ ministry, Jesus would certainly not have followed their tradition. He strongly criticized the religious leaders when he said to them: “You have made the word of God invalid because of your tradition.—Matthew 15:6.”[1]

Knowing that, we can make use of the apparent contradiction between Genesis 28:13 and Exodus 6:2-3 in order to get to the heart of the issue by asking Witnesses, “Does ‘making the God’s name known’ mean using the word ‘Jehovah’ or does it mean proclaiming and reverently showing what God is like—the greatness of his person and character?”

I like to illustrate this point by saying, “When Jesus said to the Father, ‘I have made your name known,’ I don’t think that means he went around announcing, ‘God’s name is Jehovah—use it!” To “make God’s name known” meant to establish a deeper relationship between him and the people. Jacob knew God’s name because God told him in Genesis 28:13. But he didn’t have a covenant relationship with God like the one God established through Moses in Exodus. Likewise, in Jesus’ day, the religious leaders knew the Bible. They knew what God’s covenant name was. What they lacked was an actual relationship with him. It was all just head knowledge.”

You can use a personal illustration by saying, “If you ask me what my father’s name is, and I tell you, ‘His name is [give your father’s name]’, have I told you much of consequence about him? Would I be `honoring his name’ by just speaking his name frequently and encouraging other people to do so? Wouldn’t it be far more important for me to tell you what he is like and to exhibit all his good qualities and standards in my own life? Likewise, it seems to me that this is what Jesus was talking about—extolling and demonstrating the great qualities of his Father. If so, it is God’s character—not the verbalizing of the name ‘Jehovah’—that is important.”

Knowing how Witnesses think, we can expect them to insist that “making God’s name known” involves actually using the name “Jehovah.”

When that happens, you can be prepared and respond, “Wouldn’t we expect that if Jesus used the divine name frequently in public, the scribes and Pharisees would have accused him of blasphemy for violating their interpretation of the Third Commandment? After all, they accused him of everything else they could think of, including trivial things like allowing his disciples to eat with unwashed hands in violation of their tradition.”

You can follow up by asking the Witnesses to show you anywhere in the Scriptures where any such confrontation occurred. Point out that the religious leaders did accuse Jesus of blasphemy but they never accused him of doing so because he uttered the divine name.

You can also point out that if Jesus used the divine name in public and emphasized its use as of crucial importance, we would expect to see him rebuking the scribes and Pharisees for giving in to fear and superstition by their refusal to use it. Ask them to show you any such confrontation in the Scriptures. He rebuked the religious leaders for many things, but never for failing to speak the divine name.

You can summarize your point by saying, “Given the fact that the Bible contains no confrontation between the religious leaders and Jesus over his speaking the name “Jehovah” out loud, what is the more reasonable conclusion—that Jesus used the divine name frequently in public or that he didn’t?”

This is just one example of the value of learning to think like a Jehovah’s Witness.

But how can we know how Jehovah’s Witnesses think on all sorts of topics?

One of the benefits of dealing with a high-control religion (like the Watchtower) which publishes large numbers of books and magazines is that it’s relatively easy to discover what their members think.

My book, Getting Through to Jehovah’s Witnesses: Approaching Bible Discussions in Unexpected Ways, has been written to show you how Witnesses think and how best to get through to them.

And that’s only one resource.

There are a number of other books and online resources to provide you with further information to help you prepare to get through to Jehovah’s Witnesses.

As you look at these resources, use the subject index and the scripture index to see what topics are covered.

How to Avoid Getting Derailed

How Witnesses Hope Your Meetings Will Go