How to Avoid Getting Derailed 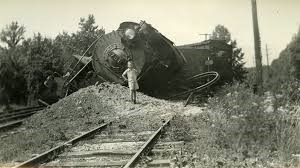 One time as I was about to embark on a series of meetings with two Jehovah’s Witnesses (or so I thought), instead of getting out his materials the lead Witness stared at me and asked point blank:

What is your purpose in meeting with us?

The tone seemed to me to be accusatory, sort of like my father sitting me down and saying, “Son, don’t you think there is something you ought to tell me?”

I quickly realized that the “wrong” answer might derail the whole process. They might tell me there was really no point in going further and head for the door.

I am going to tell you how to respond to a question like that, but first I want to explain why the Witnesses asked it in the first place.

Jehovah’s Witnesses come to our doors to talk with us, and the more “home Bible studies” they conduct, the better it looks on their monthly time reports to the congregation elders.

In addition, spending their witnessing time sitting in a receptive householder’s living room is far more enjoyable than walking the streets for hours encountering people who aren’t interested or who may even slam the door in their faces.

So why did they ask a question that might derail a potential study before it got started?

There were three reasons.

First, they wanted to establish their dominance.

I was supposed to get the idea that studying with Jehovah’s Witnesses is a great privilege which they would only grant me if they decided I was worthy of their effort.

They wanted to make sure that came across from the get-go.

Second, they wanted to avoid wasted efforts. In the Witness mindset, there is only one legitimate purpose for a householder meeting with them, and that is openness to humbly learning and submitting to the “truths” of the Watchtower religion.

They saw anything else as a waste of their time. They didn’t want to engage in an equal interchange of ideas any more than a car salesperson wants to waste time in meaningless chatter with someone who has only come into the dealership to window shop and kick a few tires.

Third—and most importantly—they wanted to be sure I wasn’t going to try to convert them to what I believe.

In their mind, because I was a part of Christendom, I was in spiritual darkness. In other words, they saw me as having been deceived by the world and the devil. Because of that, there was nothing of spiritual value I could possibly teach them, and they wanted to make sure I didn’t even try.

As Christians, we don’t want to lie to Jehovah’s Witnesses about our motivations, but we do want to meet with them and make an effective gospel presentation.

So I responded this way:

That’s the gist of what I recommend you say to them. You can put it in your own words, but the key is to establish the expectation that you will all study God’s Word and obey it.

They found my response acceptable—maybe even positive from their point of view—but then they asked a follow-up question:.

If we show you from the Bible that what we believe is the truth, would you be willing to become a Jehovah’s Witness?

I actually found that question easier to answer than the first one. I said:

Yes. If you convince me from the Bible that you have the truth and I don’t, I will change and join you. I do want to be honest and tell you that I have some firm convictions and that I won’t come around easily. In fact, I’m sure I’ll ask you a lot of questions. But if you’re willing to proceed on that basis, so am I.

I recommend similar responses to you.

Not only are such replies likely to avoid an early derailment, but they can help you establish an atmosphere in which:

Should You Give Your Personal Testimony?

3 Comments on "How to Avoid Getting Derailed"

David – There is one more reason they asked ‘What is your purpose in meeting with us?’. They are indoctrinated not to speak to ‘apostates’, people who were once JWs but woke up and left the cult. They are told apostates are mentally diseased and Gods enemies. They even stated in a Watchtower publication if it were not for the law they would stone the ex JW to death!

I found it odd that, as soon as I agreed to the ‘bible’ study , my house became their turf as far as teaching. So, if a JW says I can ask questions, I take her up on the offer.

Yes, they consider themselves the only rightful teachers because they believe only they are “in the truth.” That’s why questions work better than statements. Even then, it’s important to be careful not to come across as hostile or they will break off the study.