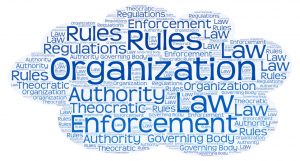 Today we begin an examination of the Watchtower Society’s law system—that is, its rules and enforcement system.

In the early days of the movement that later became the Watchtower Bible and Tract Society of Jehovah’s Witnesses, its founder, Charles T. Russell, wrote, “Beware of ‘organization.’ It is wholly unnecessary. The Bible rules will be the only rules you will need. Do not seek to bind others’ consciences, and do not permit others to bind yours. Believe and obey so far as you can understand God’s Word today, and so continue to grow in grace and knowledge and love day by day.”[1]

How things have changed!

Now the Watchtower says, “The first-century Christian congregation had a governing body composed of apostles and elders at Jerusalem. A similar body of anointed Christians functions now. This governing body is the administrative part of a ‘faithful and discreet slave’ or ‘steward’ class concerning which Jesus promised: ‘His master will appoint him over all his belongings.’ (Matt. 24:45-47; Luke 12:42-44) So, recognition of that governing body in God’s theocratic arrangement of things is necessary for submission to the headship of God’s Son.”[3]

According to the Watchtower, opposers of the truth “may also question the need for an organization to direct the minds of God’s people. Their view is, God’s spirit can direct individuals without some central, organized body of men giving direction. They will declare that all one needs to do is to read the Bible. But Christendom has been reading the Bible for centuries. And look at the indistinct trumpet call coming from Christendom today! See the confusion and misunderstanding as to the true message contained in God’s Word! What a contrast this is to the foretold peace and unity among true Christians who not only read the Bible but search out and zealously apply its teachings!—Ephesians 4:3-6.”[4]

Not only does it proclaim itself the instrument of God’s spirit to direct the minds of God’s people; it also claims that its direction is indispensable for those who want everlasting life: “Jehovah God has also provided his visible organization, his ‘faithful and discreet slave,’ made up of spirit-anointed ones, to help Christians in all nations to understand and apply properly the Bible in their lives. Unless we are in touch with this channel of communication that God is using, we will not progress along the road to life, no matter how much Bible reading we do.”[5]

The Watchtower considers itself to be theocratic, having God’s as its head: “Jehovah’s organization is theocratic. That means that it is ruled by the direct administration of God, and all who desire to serve in association with the organization must respect the theocratic arrangement of things. They must submit to Jehovah God as the Universal Sovereign and they ought to give full cooperation to those whom he has put in positions of responsibility.”[6]

Accordingly, the Watchtower’s rules and procedures must not be questioned: “When the Israelites questioned Aaron’s appointment and position, Jehovah viewed that action as murmuring against Him. (Num. 17:10) Similarly, if we were to start grumbling and murmuring about those whom Jehovah is using to direct the earthly part of his organization, we could by inference be complaining about Jehovah.—Heb. 13:7, 17.”[7]

As a result of these claims, the Watchtower has constructed a body of rules and regulations Jehovah’s Witnesses must follow, along with a system of rewards and punishments to enforce them.

Concerning these developments, former Governing Body member Raymond Franz wrote, “I was not opposed to authority. I was opposed to the extremes to which it was carried. I could not believe that God ever purposed for men to exercise such all-pervading authoritarian control over the lives of fellow members of the Christian congregation. My understanding was that Christ grants authority in his congregation only to serve, never to dominate… It must result in the exaltation of Christ Jesus as the Head, never in the exaltation of an earthly authority structure and its officers. As it was, I felt that the role of Christ Jesus as active Head was overshadowed and virtually eclipsed by the authoritarian conduct and constant self-commendation and self-praise of the organization.”[8]

It is these issues we will be examining.