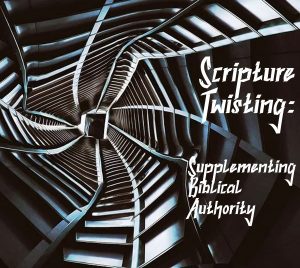 Supplementing Biblical authority means, “New revelation from postbiblical prophets either replaces or is added to the Bible as authority.”[1]

Jehovah’s Witnesses would deny that the Watchtower engages in this sort of error. They would point out that they recognize only the Bible as Scripture, unlike, say, the Church of Jesus Christ of Latter Day Saints (Mormons), which explicitly recognizes other scriptures—The Book of Mormon, The Pearl of Great Price, and Doctrine and Covenants.

However, the Watchtower does claim to be God’s modern day prophet and his sole channel of communication today.

Here are examples of claims it has made throughout its history (emphasis added in quotations):

In 1972, the Watchtower published this extensive article, in which it claimed to be Jehovah’s current day prophet:

‘They Shall Know that a Prophet Was Among Them’

JEHOVAH GOD is interested in having people know him. Though he is invisible to human eyes, he provides various ways by which they can know his personality. They can know what to expect from him and what he expects of them.

One can come to understand that Jehovah is a God of surpassing wisdom by observing creation. This also reveals the loving care with which he designed things for man’s welfare and enjoyment. A second way to know God is through his Word of truth, the Bible. Herein one finds the full expression of Jehovah’s purpose toward mankind—why man is on the earth and the blessings that God has in store.

A third way of coming to know Jehovah God is through his representatives. In ancient times he sent prophets as his special messengers. While these men foretold things to come, they also served the people by telling them of God’s will for them at that time, often also warning them of dangers and calamities. People today can view the creative works. They have at hand the Bible, but it is little read or understood. So, does Jehovah have a prophet to help them, to warn them of dangers and to declare things to come?

These questions can be answered in the affirmative. Who is this prophet? The clergy of the so-called “Christian” nations hold themselves before the people as being the ones commissioned to speak for God. But, as pointed out in the previous issue of this magazine, they have failed God and failed as proclaimers of his kingdom by approving a man-made political organization, the League of Nations (now the United Nations), as “the political expression of the Kingdom of God on earth.”

However, Jehovah did not let the people of Christendom, as led by the clergy, go without being warned that the League was a counterfeit substitute for the real kingdom of God. He had a “prophet” to warn them. This “prophet” was not one man, but was a body of men and women. It was the small group of footstep followers of Jesus Christ, known at that time as International Bible Students. Today they are known as Jehovah’s Christian witnesses. They are still proclaiming a warning, and have been joined and assisted in their commissioned work by hundreds of thousands of persons who have listened to their message with belief.

Of course, it is easy to say that this group acts as a “prophet” of God. It is another thing to prove it. The only way that this can be done is to review the record. What does it show? (Watchtower, 4/1/72, p.197)

The Watchtower tries to have it both ways.

When you point out to Jehovah’s Witnesses errors and doctrinal changes of the Watchtower, they will tell you that the Governing Body members are just humble men who have never claimed to be infallible or inspired.

In order to counter this, show them the Watchtower literature which makes the claims set out above.

Spell out point by point what the Watchtower has said and them ask them to what standard we can rightfully hold an organization which claims that:

How interesting that the GoBo are ‘humble’ unless you have a problem with their doctrines as it relates to the Bible. Heaven forbid you question what they proclaim via Jwdotborg. I don’t think it’s possible to contradict even a congregation elder without running afoul and risking a ‘public reproof’ (BEST case scenario). And I’ve seen Judicial hearings into Apostasy where the men residing over the case couldn’t care less about how much the ‘defendant’ knows about scripture but whether or not they uphold WT theology. EVEN IF IT CONTRADICTS THE BIBLE. Messed up!
Reply   -   Share

Yes – Johanna – WT theology trumps Gods Word according to this cult! The WT is the apostate! They called me apostate and disfellowshipped me because I got upset over the mishandled child sex abuse for the past 60 years AND I told them about Geoffrey Jackson lying at the Australian Royal Commision while under sworn oath testimony! Now I am a born again Christian, I am happy and peaceful and free from the WT cult. Thank you David Englund – your work helped me rebuild my faith – now I am using your ministry to help my family. I… Read more »
Reply   -   Share

Thank you, Betty! I really appreciate the encouragement. Feedback helps me know whether I am really helping people.

After showing the JWs the list of failed prophecies Watchtower made and showing them their books, I was told these were old light and that they now follow the new light. They even showed me the verse about light getting brighter and brighter. I read that and commented that they should never accept a verse without reading the whole chapter. Interesting part was when I asked them directly regarding that verse, among other questions, they danced around them and said, “We will find answers for you.” They never came back.
Reply   -   Share

They do that a lot: “I’ll have to research that…” and then you never heard from them again.