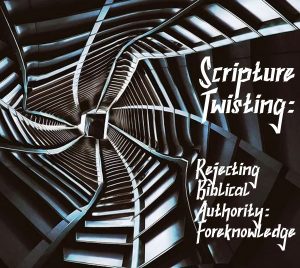 As a reminder of the definition from last week, a person or organization commits the error of rejecting biblical authority when “either the Bible as a whole or texts from the Bible are examined and rejected because they do not appear to agree with reason or other revelation.”[1]

Admittedly, the issue of God’s foreknowledge is a very difficult one, even for the most brilliant of theologians. The conflicting views are still being debated and refined to this day.

The Watchtower has staked out a rather extreme position on this issue, based on what it considers to be fair and just.

For example, it teaches that God voluntarily restricted his knowledge of the future such that he didn’t know Adam and Eve were going to sin:

The first problem with this approach is that it starts with what the Watchtower considers fair and reasonable and then works backwards. That’s what this error is all about—twisting the Bible to comply with what we have already concluded is or isn’t reasonable.

The second problem is that—if applied consistently—this line of reasoning would mean that God has no idea what any human being will or won’t do because to know it beforehand would allegedly eliminate that person’s freedom to choose otherwise.

The third problem is that it ignores a significant number of scriptures.

Contrary to its own stated doctrine about God limiting his foreknowledge, in other places the Watchtower has to acknowledge that the Father and Son know in advance what specific people will do:

The problem with the Watchtower isn’t that it struggles with difficult topics like this.

The first problem is that—because it concludes that it is Jehovah’s sole channel of communication—it tries to explain everything rather than humbly admitting that some things are beyond its understanding.

The second problem is that in announcing a doctrine, it doesn’t indicate any doubt caused by scriptures that don’t match its conclusion; it simply ignores them in favor of what it considers to be reasonable.

The third problem is that because the Watchtower believes only it has the truth and understands the deep things of God and that adherents of all other religion are false and satanic, it ignores the writings of theologians such as Jacob Arminius and John Calvin and keeps Jehovah’s Witnesses ignorant of them.

I certainly don’t claim to be able to resolve definitively the tension that exists between God’s sovereignty and man’s free will.

I prefer to approach a subject like this by pointing out what I call “error boundaries.” By that I mean that we have fallen into error which is contradicted by scripture if our reasoning process leads us to conclude any of the following:

My own view of this issue is that we humans can only think sequentially, whereas for God all of history is an eternal present.

I believe that God’s type of existence is beyond our ability to comprehend in this life, much as horses are incapable of understanding the musical compositions of Beethoven.

That doesn’t mean we shouldn’t wrestle with difficult issues and seek understanding.

It does mean that in this life we need to admit that there are limits to our ability to comprehend.

Authority -- Bible vs. Organization, Bible Interpretation, The Nature of God