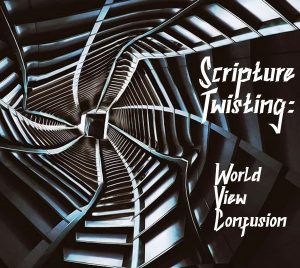 World-view confusion means this: “Scriptural statements, stories, commands or symbols which have a particular meaning or set of meanings when taken within the intellectual and broadly cultural framework of the Bible itself are lifted out of that context, placed within the frame of reference of another system and thus given a meaning that markedly differs from their intended meaning.”[1]

John 6:66-69 tells us that after Jesus gave a speech in which he talked about the necessity of eating his flesh and drinking his blood, “…many of his disciples turned back and no longer walked with him. So Jesus said to the twelve, ‘Do you want to go away as well?’ Simon Peter answered him, ‘Lord, to whom shall we go? You have the words of eternal life, and we have believed, and have come to know, that you are the Holy One of God.’”

Clearly, the focal point of this affirmation is Jesus himself. He also is the one to whom we must come. He alone is “the Holy One of God.”

However, since Jesus isn’t here physically any longer and since the Watchtower is convinced that he has appointed it as his “faithful and discreet slave” and put it in charge of all his earthly affairs, it substitutes itself for Jesus in Peter’s declaration.

It concludes that people must come not directly to Jesus but to the Watchtower organization for everlasting life (emphasis added in quotations).

Jehovah’s Witnesses would vigorously deny the claim that the Watchtower organization has supplanted Jesus in their lives.

Along with that, you can show them the Watchtower’s teaching that Jesus in not their mediator but only the mediator for the 144,000:

Nevertheless, in a preliminary way, the great crowd have already “washed their robes and made them white in the blood of the Lamb.” (Revelation 7:14) Christ does not act as Mediator of the new covenant toward them, yet they benefit from this covenant through the work of God’s Kingdom.

You can also show them Jesus’ statement to the Pharisees in John 5:39-40: “You search the Scriptures because you think that in them you have eternal life; and it is they that bear witness about me, yet you refuse to come to me that you may have life.”

In the past, I’ve tried to talk to JW’s about 1 Tim 2:5 and Acts 4:12, as well as John 14:6. In retrospect, it came off LESS as a theological discussion and more like my attempt to beat my head against the sharp corner of a brick wall. Your post only highlighted how WT forces the JW mind to substitute the organization in place of Christ, while they deny they do this. Verses like 1 Tim 2:5 doesn’t leave room for interpretation, or Misinterpretation for that matter. And YET, somehow, JW’s are taught to believe that what the verse SAYS… Read more »
Reply   -   Share