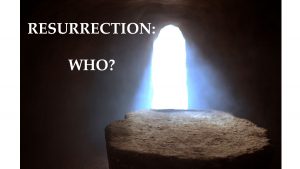 Who does the Watchtower believe will be resurrected?

In its article, “What is the Resurrection?” (located under the tab “Bible Teachings” on the Watchtower’s website, jw.org), the Watchtower says that everyone will be resurrected. But then it tells us that they won’t.

Initially, it states, “Jesus will restore ‘all those in the memorial tombs’ to life, each one with his unique identity, personality, and memories.”

Citing Acts 24:15, it asserts, “The Bible says that there is going to be a resurrection of both the righteous and the unrighteous.”

That seems clear enough, but if you read on in the article you’ll discover that the Watchtower doesn’t really believe what it seems to have said.

Okay, so far so good. Christians would agree.

But then the Watchtower says, “The unrighteous include those who failed to meet God’s standards but did not have the opportunity to learn and follow them.”

Wait a minute. There’s a qualification. The unrighteous will be resurrected if they didn’t have the opportunity to learn and follow God’s standards. Where does that come from? No scripture is cited.

They go on to explain, “However, those who become so wicked that they are beyond reform will not be resurrected. When such ones die, they suffer permanent destruction with no hope of a return to life.”—Matthew 23:33; Hebrews 10:26, 27.” Who makes this decision? Jehovah God, of course.

Do the referenced passages really say what the Watchtower claims?

In the Watchtower’s translation, Matthew 23:33 reads as follows: “Serpents, offspring of vipers, how will you flee from the judgment of Gehenna?”

Their rendering of Hebrews 10:26, 27 reads this way: “For if we practice sin willfully after having received the accurate knowledge of the truth, there is no longer any sacrifice for sins left, but there is a certain fearful expectation of judgment and a burning indignation that is going to consume those in opposition.”

Neither of those passages says that the person won’t be resurrected before judgment is pronounced. But that’s the way the Watchtower interprets it. Why? Because of its doctrine about the fate of the wicked who don’t repent.

We’ll examine that in more detail next time.

All those in the memorial tombs will hear Jesus’ voice and come out (John 5:28-29), right? Except the Watchtower teaches that there will be many who are so wicked that they won’t be resurrected at all. In discussing this topic with Jehovah’s Witnesses, ask them to explain this contradiction in Watchtower teaching.

3 Comments on "The Resurrection: Who?"

“But then the Watchtower says, “The unrighteous include those who failed to meet God’s standards but did not have the opportunity to learn and follow them.””

Here is a conversation I had with a Witness recently, who decided to cut ties with me, as he couldn’t answer my questions and labelled me an ‘opposer.’ His name is Terry. I’m still exploring the issues around the Memorial Tomb in the Organisation’s teachings, and it appears to suggest uncertainty. On the JW. Org site, the Memorial Tomb is “a burial place in which the remains of a deceased person were placed with the hope [not certainty] that he would be remembered, especially by God.” My questions are: 1. Does this mean that not all will be resurrected; or… Read more »
Reply   -   Share