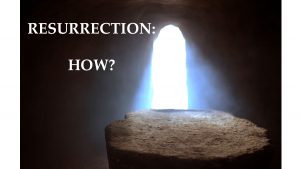 Let’s look at two passages in 1 Corinthians 15 which it uses as proof texts to see if it is right or wrong.

There is a Natural Body and a Spiritual Body

1 Corinthians 15:50 states: “I declare to you, brothers, that flesh and blood cannot inherit the kingdom of God, nor does the perishable inherit the imperishable.”

The Watchtower says that this shows that the great crowd cannot go to heaven and rule with Christ. Only the 144,000 can do so because they don’t have “flesh and blood” in their “spirit resurrection.”

To understand what a Bible passage is really saying, we need to look at the entire context, not just isolated quotations.

1 Corinthians 15:35-37: “But someone may ask, ‘How are the dead raised? With what kind of body will they come?’ How foolish! What you sow does not come to life unless it dies. When you sow, you do not plant the body that will be, but just a seed, perhaps of wheat or of something else.”

Paul is not discussing two different types of resurrection bodies. He is contrasting the natural, perishable bodies we have now (the seed that is sown and dies) with the bodies Christians will have in the resurrection (the plant that comes from this seed).

15:38-39: “But God gives it a body as he has determined, and to each kind of seed he gives its own body. All flesh is not the same: Men have one kind of flesh, animals have another, birds another and fish another.”

The body we got from Adam is dependent on the limited processes of earth. It is perishable, sown in dishonor, sown in weakness.

In contrast, the body we will get from Christ will be dependent on God’s unlimited Spirit from heaven. It will be imperishable, raised in glory, raised in power.

The current life we derived from Adam came first. The power source of that body comes from the earth.

15:50: “I declare to you, brothers, that flesh and blood cannot inherit the kingdom of God, nor does the perishable inherit the imperishable.”

This verse uses “flesh and blood” as a figure of speech that means our limited, perishable, earthly bodies that we inherited from Adam. Those bodies cannot inherit God’s kingdom because they are corrupted by sin and perishable. They are only the seed from which the resurrection body will come.

In contrast, the resurrection bodies Christians will receive from Christ (the plant from comes from the seed) will be able to inherit God’s kingdom because they will be imperishable and incorruptible, empowered by the Spirit and no longer subject to decay and death.

The key point is that 1 Corinthians 15 is not—as the Watchtower claims—contrasting two different types of resurrection bodies. Rather, it is contrasting our current bodies (the seed) with what they will become in the resurrection (the plant). Do you believe this context will help you as you discuss these verses with Jehovah’s Witnesses?