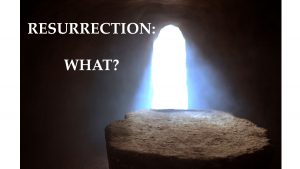 In order to discuss Bible topics effectively with Jehovah’s Witnesses, Christians need to have a clear understanding of the differences between Christian doctrine and Watchtower teachings.

For this reason, I have decided to do a series of posts contrasting the Christian and Watchtower views of the resurrection.

Christians believe that every human being has a non-physical soul that survives physical death. This is not the resurrection; it’s an intermediate state. The resurrection is a reuniting of soul and body which will take place in the end times.

The resurrection body will not be identical to the body that died, but there will be continuity, sort of like a seed that produces a plant. 1 Corinthians 15:35-38: “But someone may ask, ‘How are the dead raised? With what kind of body will they come?’ How foolish! What you sow does not come to life unless it dies. When you sow, you do not plant the body that will be, but just a seed, perhaps of wheat or of something else. But God gives it a body as he has determined, and to each kind of seed he gives its own body.”

The Watchtower’s basic teachings are set out on its website, jw.org, in an article entitled “What is the Resurrection?” This article can be found under the tab entitled “Bible Teachings.”

Witnesses believe that there is no non-physical human soul that survives physical death; when you’re dead, you go out of existence completely. The article states, “[It is a myth that the] resurrection is a reuniting of the soul with the body… The Bible teaches that the soul is the entire person, not some part that survives death…”

The article states, “In the Bible, the word translated as ‘resurrection’… means ‘raising up’ or ‘standing up again.’ A person who is resurrected is raised up from death and restored to life as the person he was before.”

But if a person is raised as a spirit creature, what exactly is “raising up” or “standing up again”? It’s not the person’s body, nor is it the person’s soul, if indeed the soul was nothing more than the body.

But even in the case of a physical resurrection, the Watchtower says it’s not the body which died that comes to life again. The article says, ““[It is a myth that] when resurrected, a person receives exactly the same body that he had before he died… After death, a person’s body would likely have broken down and disintegrated.”

What the Watchtower believes in is not a rising from the dead of something that once was alive. Rather, it is a re-creation of the person from God’s memory: “A person who is resurrected is not reunited with his soul; he is recreated as a living soul.” In their view, Jehovah will implant the person’s memories and personality into a new body.

The Christian might well ask Jehovah’s Witnesses, “If it isn’t the deceased person’s body that is raised from the dead and if there is no separate soul or personality that survives physical death, then would it really be the person who died who comes to life again? Wouldn’t it rather be a completely new person who is being given the memories and personality of someone else?”

If, as the Watchtower teaches, it won’t be your body or your soul which dies and then comes back to life again, in what sense is it really you that is being resurrected from the dead?

Biblical Salvation: Righteousness from God to Save Us from Our Selves

9 Comments on "The Resurrection: What?"

Hi David: Here is quote from you article:”If it isn’t the deceased person’s body that is raised from the dead and if there is no separate soul or personality that survives physical death, then would it really be the person who died who comes to life again? Wouldn’t it rather be a completely new person who is being given the memories and personality of someone else.” The main sects that believe in Conditional Immortality besides the JWs are the SDAs, Christadelphians, and most Biblical Universalists. Most people don’t realize this but even Luther himself seemed to favour a form of… Read more »
Reply   -   Share

Our earthly bodies are changing all the time at the cellular level, yet there is a continuity so that despite all the changes it is still our body. The resurrection body isn’t identical to the earthly one but the earthly one is the seed from which it comes (1 Corinthians 15:36-44). So once again there is a continuity so that despite the significant changes described in 1 Corinthians 15:44-53 (dishonor v. glory, weakness v. power, empowered by physical processes v. empowered by the spirit, perishable v. imperishable), it is still us.

The continuity that our ever changing bodies have in this life is a real, ongoing chemical reconstruction. At death that stops. If we insist on having “continuity”, we are forced to see that continuity as an Act of God, a miracle, because, of course, the atoms once composing the person have been dispersed throughout the natural world. Some of those atoms have been reused thousands of times and are now part of gases in the atmosphere, water molecules in the oceans and clouds and even parts of other people. So, if continuity is the watchword we must abide by, then… Read more »
Reply   -   Share

I certainly agree that a resurrection is a miracle, not a natural process. I also acknowledge that the term “continuity” doesn’t appear in the Bible. However, in 1 Corinthians 15, Paul compares the natural, perishable body to a seed that is sewn. The resurrection body is something different (imperishable) that comes from that seed. So God uses the natural body that died in some way in fashioning the resurrection body. That’s what I mean by “continuity.” That’s what leads me to conclude that the resurrection is not the implanting of a person’s thought and emotional patterns (having no existence after… Read more »
Reply   -   Share

So, then, what is the process. I don’t think we can know exactly how He does this, just that he does do it. I think we agree, in that, but that we disagree on the intermediate state

However, the main point really, is how do we help JWs think outside the Watchtower box. The people that I’ve counseled, who are just leaving, or trying to leave, are hobbled by this incessant, overriding obsession with the Governing Body telling them what to believe. My advice is always the same. I tell them to forget about somehow getting the whole picture and every doctrine perfect right away. The confusion and fear will just send them running back to the safety of the Society. They need to pick one subject, one doctrine, at a time. Read all the opinions about… Read more »
Reply   -   Share

One thing I’ve noticed is that if I ask JWs a question like, “What do you think are the main points Paul makes in the book of Galatians?” they have no idea. The Governing Body presents the Bible to them as a series of isolated verses which it uses as proof texts for its teachings. In order to get them to think outside that WT box, I often suggest that they stop thinking topically for awhile and instead just read a chapter or book straight through and let the Bible writer set the agenda. If they will do that type… Read more »
Reply   -   Share

You are right. Everybody proof texts, but because the Society is so incessantly at war with all the rest of Christendom, many JWs never get a real chance to just let the Scripture speak for itself and just sink in, with all of its grace and power. It is probably good advice for all of us. Just today I read a portion of 1Chron that I probably have not read in years, just as one flowing piece of history. I had forgotton what a great story it is in its own right, apart from all the technical checking of which… Read more »
Reply   -   Share