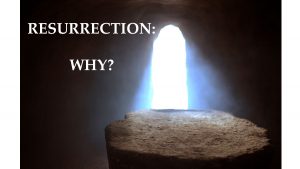 Christians believe that all of the dead will be resurrected in the end times either to live forever in paradise (the saved) or to experience everlasting conscious punishment (the unsaved). The determination will be made by God based on whether or not in this life they repented of their sins and accepted God’s free gift of salvation purchased by Jesus Christ on the cross.

But the Watchtower teaches something quite different.

The Watchtower teaches that those who die will fall into one of three categories.

1. 144,000 “anointed” Jehovah’s Witnesses chosen by God throughout the Christian era.

These will be judged by Jehovah based solely on their conduct in this life. If they “exercise faith” sufficiently that they “prove worthy,” they will be resurrected in spirit form and live with Christ forever in heaven.

2. A great crowd of righteous people and of unrighteous people “who failed to meet God’s standards but did not have the opportunity to learn and follow them.” (“What is the Resurrection?”, jw.org / Bible Teachings)

These will have the opportunity to learn God’s ways and to prove worthy of everlasting life by progressing to moral perfection by the end of the 1,000 years of Christ’s millennial kingdom on earth.

Those who do not prove worthy will not undergo everlasting conscious punishment. Rather, they will go out of existence forever because God will completely annihilate them.

But wait. What about Hebrews 9:27, which says that “… man is destined to die once, and after that to face judgment”? Doesn’t that show that no one will have a second chance after this life in which to repent?

The Watchtower believes that “after that” doesn’t necessarily mean “immediately after death.” Rather, it can refer to a long period (up to 1,000 years) of opportunity for people to progress to moral perfection after their resurrection.

It bases its conclusion, in part, on its unique rendering of Romans 6:7: “For the one who has died has been acquitted from his sin.”

It states: “The Bible says that ‘those who practiced vile things’ will receive ‘a resurrection of judgment.” (John 5:29) However, this judgment is based on what they do after they are resurrected, not before. Jesus said: ‘The dead will hear the voice of the Son of God, and those who have paid attention will live.’ (John 5:25) Those who ‘pay attention’ to, or obey, the things they learn after they are resurrected will have their names recorded in ‘the scroll of life.’” (Same article)

3. An unspecific number of people who became “so wicked that they are beyond reform will not be resurrected. When such ones die, they suffer permanent destruction with no hope of a return to life.” (Same article)

In other words, these wicked people will simply remain dead forever with no further opportunity for everlasting life.

One of its primary proof texts for the existence of such a category of people is Hebrews 10:26, 27: “For if we practice sin willfully after having received the accurate knowledge of the truth, there is no longer any sacrifice for sins left, but there is a certain fearful expectation of judgment and a burning indignation that is going to consume those in opposition.”

Wait a minute. What about the Watchtower’s version of Romans 6:7: “For the one who has died has been acquitted from his sin”? When these wicked people died, weren’t they acquitted from their sins? Why wouldn’t they start with a clean slate just like other people who “practiced vile things”?

This can be a fruitful area of discussion with Jehovah’s Witnesses. Why are some people who “practiced vile things” in this life acquitted from their sins while others are not? If Jehovah knows that some people are “beyond reform” the moment they die, why doesn’t he know with respect to every individual whether they will reform during the millennium or not? Why not restrict the resurrection to those he knows will ultimately reform?

The Watchtower’s annihilationist teaching is the crux of the problem.

Because the Watchtower teaches that death is non-existence and does not believe in everlasting conscious punishment of unrepentant sinners, it can see no purpose in God resurrecting someone only to annihilate him immediately thereafter with no chance of salvation. Accordingly, it concludes that Jehovah will simply decide not to resurrect such people at all.

Have you ever discussed these aspects of the resurrection with a Jehovah’s Witness? Has this posting given you any ideas for communicating with them more effectively next time?

2 Comments on "The Resurrection: Why?"

What about the second death in Revelation.

The “second death” is the same as the lake of fire. See Revelation 20:14 and 21:8. This is not non-existence. The beast and false prophet will be thrown into the lake of fire (Revelation 19:20), and they will still be there when Satan is thrown there 1000 years later. All of them be tormented day and night forever (Revelation 20:10). See also Luke 16:19-31. Even though those who trust Christ as Savior die physically, they do not experience this second death but have passed from death into life (John 5:24).