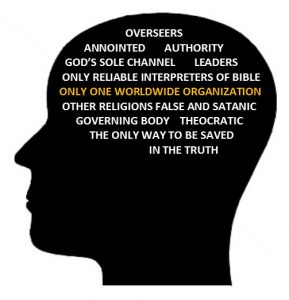 Jehovah God works through one and only one organization today—the Watchtower Society. Devotion to that concept is what makes a person a Jehovah’s Witness. This organizational mindset dominates every aspect of their minds, hearts, and lives.

If you are to be effective in sharing the gospel with Jehovah’s Witnesses, it is critical that you understand this mindset and its implications thoroughly. It explains why standard gospel presentations with which you may be familiar have no impact whatever on them.

In future posts, I will be sharing with you questions to ask that take the reality of this mindset into account. In this post, though, I just want to show you how this organizational mindset is created and maintained.

How does the Watchtower instill this organizational mindset in the first place? Essentially, there are four steps:

Under the heading “Organization” at page 283 of its book, Reasoning from the Scriptures, the Watchtower asks the following question: “Does Jehovah really have an organization here on earth?” In answering that question in the affirmative, they make the following points (each followed by Scripture citations):

• God is not a God of disorder.
• The universe itself is ordered.
• God’s heavenly creatures, the angels, are organized.
• God conveyed instructions in times past through family heads (Noah and Abraham) and then the nation of Israel.
• Given all this, did God then leave Christians unorganized? No, the Watchtower argues, he brought the Christian congregation together with overseers and a central governing body.
• Moreover, Christians should be united, not divided (1 Corinthians 1:10), and that doesn’t describe the varied churches of Christendom.
• Jesus said in John 10:16 that his followers would be one flock with one shepherd. “Is it not obvious,” the Watchtower therefore asks, “that they could not be scattered in Christendom’s religions?”

In the same book (pages 283-284), the Watchtower asks, “How can Jehovah’s visible organization in our day be identified?” and gives the following answer (again, with Scripture citations which I’m omitting here):

(1) It truly exalts Jehovah as the only true God, magnifying his name.
(2) It fully recognizes the vital role of Jesus Christ in Jehovah’s purpose—as the vindicator of Jehovah’s sovereignty, the Chief Agent of life, the head of the Christian congregation, the ruling Messianic King.
(3) It adheres closely to God’s inspired Word, basing all its teachings and standards of conduct on the Bible.
(4) It keeps separate from the world.
(5) It maintains a high level of moral cleanness among its members, because Jehovah himself is holy.
(6) It devotes its principal efforts to doing the work that the Bible foretold for our day, namely, the preaching of the good news of God’s Kingdom in all the world for a witness.
(7) Despite human imperfections, its members cultivate and produce the fruits of God’s spirit—love, joy, peace, long-suffering, kindness, goodness, faith, mildness, self-control—doing so to such a degree that it sets them apart from the world in general.

By appending Scripture references to each of these points, the Watchtower gives the appearance that these are the Bible’s requirements for being a Christian. The vast majority of people who read Watchtower literature will simply assume that the referenced verses teach what the Watchtower claims they do. It takes a great deal of time and effort to read each of them in context.

In addition, notice what it leaves out. It makes no reference to the need for a transforming new birth. The focus is organizational. Pleasing God is tied to affiliating with and obeying the directives of the right organization.

Step 3: It repeats these claims constantly so that Jehovah’s Witnesses accept them without question.
If Witnesses were born into or raised in a Jehovah’s Witness family, it’s all they know. These “truths” have been impressed on them all their lives.

If they converted from a different religion or from no religion, they were taught these things as part of the conversion process. They are not allowed to be baptized until they are express belief in these claims and a willingness to dedicate themselves to serving Jehovah through “his organization.”

These points are reinforced by repetition in one form or another meeting after meeting and publication after publication. Witnesses are surrounded by people at the Kingdom Hall who believe these things and who continually reinforce each other’s beliefs in them. They are even trained to present these points as part of the “truth” they teach in the “home Bible studies” they conduct door-to-door.

Jehovah’s Witnesses come back to these points again and again as proof that they alone are “in the truth.”

Step 4: It portrays challenges to its claims as slander and persecution.
Even if God had one and only one organization on earth, and even if those were the criteria, what’s the proof that the Watchtower measures up?

For example, how do you know that the Watchtower maintains a higher standard of moral cleanness than any other group? The Watchtower has recently been investigated by a Royal Commission in Australia for allegedly covering up thousands of child sexual abuse allegations against various Jehovah’s Witnesses since 1950. Several female ex-Witnesses are suing the Watchtower in the United States, alleging its failure to protect them from that sort of abuse.

The Watchtower portrays all of these allegations as persecution by a world system under the control of Satan. It advises Jehovah’s Witnesses to avoid listening to such “slander.”

For this reason, direct attempts to challenge the rosy portrayal Watchtower writers paint of the organization often backfire. Most Witnesses won’t look at evidence you might try to present to them (such as findings of courts or of the Royal Commission mentioned above.) Witnesses see it as persecution by Satan and as further proof that they are indeed “in the truth.”

The better you understand the mind and heart of Witnesses—where they are coming from and why—the greater the likelihood that you will be able to minister to them, communicate with them effectively, and show them unconditional Christian love and compassion.

If you have experience in talking with Jehovah’s Witnesses, have you seen evidence of this organizational mindset? How have they tried to convince you that the Watchtower is “God’s organization”?

Were the Apostles a “Governing Body”?