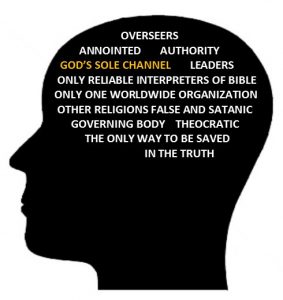 I will devote one post to each of these claims.

Watchtower Claim #1: The Watchtower Society is God’s sole channel of communication to mankind.

What proof do the Watchtower writers give for this claim?  “Among the evidences… are these: their witnessing to Jehovah’s name and established kingdom; their accepting the entire Word of God; their keeping separate from the world, and their being persecuted by all nations.”[1]

The Watchtower argues that both history and reason lead to the conclusion that God would not have other spokesmen who refuse to submit to the authority and direction of his one true organization:

“Today the anointed spirit-begotten witnesses of Jehovah, comprising the ‘faithful and discreet slave,’ serve as an earthly channel of communication for the great crowd of people who will survive Armageddon. These anointed witnesses along with the ‘great crowd’ of companions form the modern-day Christian organization through which God’s spirit is in operation. (Matt. 24:45-51; Rev. 7:9-17) Never has God had more than one channel of communication at one time. Failure to recognize and associate with his anointed witnesses would certainly indicate that one is not in Jehovah God’s organization and under his spirit.“[2] (emphasis added)

The Watchtower equates trusting in God with trusting in them: “Trusting in Jehovah will include trusting the modern visible channel that he has clearly been using for decades to serve his purposes.”[3]

The Watchtower strongly discourages Jehovah’s Witnesses from questioning any of its teachings: “Theocratic ones will appreciate the Lord’s visible organization and not be so foolish as to pit against Jehovah’s channel their own human reasoning and sentiment and personal feelings… After being nourished to our present spiritual strength and maturity, do we suddenly become smarter than our former provider and forsake the enlightening guidance of the organization that mothered us? ‘Forsake not the law of thy mother.’ (Prov. 6:20-23)”[4]

Despite their reliance on the organization, because Witnesses believe the Watchtower is God’s channel of communication, they see themselves as followers of God rather than of men.

Here is how the Watchtower explains it:

“Obedience to those who today are taking the lead among us is vital. Think of how Jehovah communicated with his people during critical times in the past. When the people of Israel left ancient Egypt, God’s orders for them came through Moses and Aaron. To survive the tenth plague, the Israelites had to obey the instructions to have a special meal and to splash some of the blood of a slaughtered sheep on the doorposts and lintels of their houses. That direction did not come to them by means of a voice out of heaven. No, they had to listen to the older men of Israel, who in turn received specific instructions from Moses. (Ex. 12:1-7, 21-23, 29) In those circumstances, Moses and the older men acted as bearers of Jehovah’s instructions to his people. Christian elders fulfill a comparably vital function today.”[5]

Of course, this comparison between the Watchtower organization and Moses raises a lot of questions which Jehovah’s Witnesses never ask. From whom did Moses get those instructions? (God Himself!) Did Moses’ instructions contain any errors? (No.) How did Jehovah convey his instructions to Moses? (Precisely and verbally.) Does the Governing Body of Jehovah’s Witnesses hear directly from Jehovah like Moses did? If not, on what basis are they making this comparison?

You would think that if you could demonstrate mistakes the Watchtower has published—changes in doctrine or end times predictions that failed to come to pass, Jehovah’s Witnesses would immediately realize that the Watchtower is not the channel of divine truth it claims to be. Not so.

They will tell you that God’s channel needs adjusting from time to time. In fact, in the Witnesses’ mindset, evidence that the Watchtower has changed some of its teachings only goes to prove that Jehovah corrects his organization when it is wrong and that the Governing Body are humble men who are willing to listen to Jehovah and make the necessary adjustments.

Here’s an example of how the Watchtower turns its failed prophecy that Armageddon would come in 1914 into a virtue:

“After 1914, The Watchtower made this significant statement: ‘Brethren, those of us who are in the right attitude toward God are not disappointed at any of His arrangements. We did not wish our own will to be done; so when we found out that we were expecting the wrong thing in October, 1914, then we were glad that the Lord did not change His Plan to suit us. We did not wish Him to do so. We merely wish to be able to apprehend His plans and purposes.’ This attitude of humility and devotion still characterizes the Lord’s anointed. They do not claim to be inspired, but they are determined to conduct the Lord’s ‘business’ on earth. And now ‘a great crowd’ of ‘other sheep,’ Christians with an earthly hope, are imitating their watchfulness and zeal.—Rev. 7:9; John 10:16.”[6]

This quotation also raises many question Jehovah’s Witnesses never ask. Were disillusioned people in 1914 disappointed at Jehovah’s end-times arrangement or at the fact that the Watchtower wasn’t really speaking for God as it claimed to be doing? When it says, “We were glad that the Lord did not change His Plan to suit us,” doesn’t that mean that the 1914 prophecy was a plan that suited the Watchtower and was never God’s plan at all? Since when is publishing false prophecy in Jehovah’s name praiseworthy as being “watchfulness and zeal”?

They fact is that they thought they were acting as the channel for God’s messages when, in reality, they were actually publishing their own mistaken ideas. Even if they were acting in good faith, why should anyone accept that they are “God’s channel of communication” and obey them without question?

Questions You Can Ask Jehovah’s Witnesses

You have to be careful how you raise these issues. You don’t want to come across as a persecutor or you will lose them. You can say something like this, “You have told me that the Watchtower is God’s channel of communication. I’m trying to understand exactly what you mean by that.”

Here are some non-threatening questions you can ask them in order to follow up:

I once said to a Witness, “If you believe something the Watchtower says and it was wrong, doesn’t that mean you were really following men and not God?” He said, “No, it’s up to Jehovah to correct his organization, not me.” If they tell you something like that, you can follow up by asking:

Can you think of other non-threatening ways to get Jehovah’s Witnesses to examine their belief that the Watchtower speaks for God and must therefore be believed and obeyed without question?