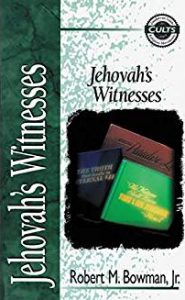 This 83-page paperback is part of a Zondervan series of small books on cults. In order to include a large amount of content in a short book, the book is written in outline format.

Part I is an introduction.

Section I gives the historical background of the Watchtower religion giving the highlights during the terms of each of the organization’s five presidents (as of 1995): Charles Russell, Joseph Rutherford, Nathan Knorr, Fred Franz, and Milton Henschel.

Section II outlines the distinctive practices of the Watchtower, covering its ban on celebrating birthdays and holidays, on taking blood transfusions, on displaying crosses, on participating in secular governments or the military.

Section I describes the Watchtower’s organizational claims and arguments it uses to justify them. Bowman then refutes these claims and outlines the biblical position on authority within the Christian faith.

Section II outlines the Trinity and deity of Christ, outlining the Watchtower position and primary arguments and then explaining and defending the biblical position.

Section III deals with death, the soul, and hell, again giving the Watchtower’s position and arguments followed by an explanation and defense of the biblical position.

Section IV covers the resurrection of Christ, relating the Watchtower’s position and arguments and giving the biblical alternative.

Section V discusses salvation, including the Watchtower’s two-class system (the anointed 144,000 and the other sheep) and the role of faith and works. Bowman then explains and defends the biblical position.

Section VI deals with Christ’s return,  explaining both the Watchtower and biblical positions and supporting arguments.

Section I gives the do’s of witnessing recommended by Bowman.

Part IV is a selected bibliography.

Section I lists books and periodicals written by Jehovah’s Witnesses.

Part V concludes the book with a parallel comparison chart which employs two columns to give an abbreviated side-by-side contrast between Watchtower teachings and the Bible for the following theological topics:

Bowman’s Jehovah’s Witnesses packs a remarkable amount of information into its 83 pages. Its shortness and its outline format makes it far less formidable than, say, Ron Rhodes’ 458-page volume, Reasoning from the Scriptures with the Jehovah’s Witnesses. Accordingly, it serves as a good introductory guide or compact refresher.

Given the frequency with which the Watchtower making doctrinal changes (claiming “new light” from Jehovah), it’s important to make sure the information in older books is still accurate. This book’s doctrinal information is. The history portion of the book is dated (the book was first published in 1995), but the rest of the information it contains is still useful.

Because of its size, this book doesn’t cover the topics in anywhere near the depth provided in other books.

Likewise, there is little in the book that will provide new information to a Christian who is experienced in dealing with Jehovah’s Witnesses. However, the book shouldn’t be judged by what it doesn’t do but by the author’s stated purpose of providing an introductory booklet about the Watchtower religion.

I have found the witnessing advice in Part III to be helpful, although it is given in general terms rather than being targeted to discussing any specific topic with the Witnesses.

Do you think you would find this book helpful to you? To other Christians who may not be well versed in Watchtower history or theology?