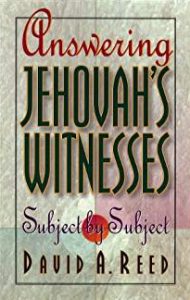 This book was written to was written to complement the author’s 1986 book entitled Jehovah’s Witnesses Answered Verse by Verse. His stated goal is to “help readers quickly understand the basics of the group’s history, changing doctrinal stances, and distinctive ideas.”

In the preface, Reed explains that Answering Jehovah’s Witnesses Subject by Subject is not merely his earlier book reshuffled into a different format. Rather, he added new material in response to new Watchtower arguments. He notes that some of these issues don’t lend themselves well to the earlier verse-by-verse format.

In the opening section, “How to Use This Book,” Reed recommends using the book in different ways depending on your purpose. If you are looking to learn about the Watchtower religion, you can read the book cover to cover. If you are currently dialoguing with Witnesses on a particular subject, you can quickly find the subject in the book (its headings are in alphabetical order). You can also quickly move from one section of the book to related entries by utilizing the cross-references.

An example of this emphasis can be seen in the book’s entry on Adam and Eve. Reed notes that Witnesses often discuss this subject at length when debating the nature of the soul and teachings about submission of wives to their husbands. However, he states, “…these are dead-end issues from the standpoint of sharing the gospel with them, hence inadvisable for Christians to pursue as topics for discussion.” However, he notes that the Watchtower used the time gap between the creation of Adam and the creation of Eve as an explanation for why Armageddon didn’t come in 1975 as the organization had prophesied. He notes that because so many years have passed since 1975, that explanation no longer makes sense. He recommends confronting Witnesses with this issue when using the Watchtower’s false prophecies to show the organization’s unreliability.

Most of the book is contained in the section entitled “Subject by Subject Answers for Jehovah’s Witnesses.” This section is organized topically and alphabetically. Despite this easy-to-understand structure, this portion of the book contains so many entries that the best way to navigate the book is to use the Subject Index at the end.

He notes that even if you have made substantial progress with a Witness, he may not show it due to fear of organizational disciplinary reprisal, including the prospect of disfellowshipping (excommunication) and shunning. He adds, “Breaking through to a Jehovah’s Witness is like tunneling through a mountain. There is no visible indication that the tunnel has almost broken through—just the same pitch black darkness until suddenly you break through into the light of day.” (p. 217)

He exhorts Christians to continue sowing the seed and leaving it to the Lord to provide the growth and harvest.

The book’s alphabetical and topical structure, combined with the Subject Index, make the book easy to use as a reference.

The author includes a great deal of information not found in other books. Often, he ties it into the issue on which he recommends we focus—the unreliability of the Watchtower.

For example, the entry “Alcyone” reveals that in the old Watchtower book Studies in the Scriptures, Volume 3, the Watchtower’s founder, Charles Russell, claimed that Jehovah dwelt in the Pleiades star named Alcyone and governed the universe from that location. In 1953, the organization reversed itself, stating that it would be unwise to try to fix the location of God’s throne. In 1981, the Watchtower changed direction again, teaching that Jehovah has a spirit body and is therefore not omnipresent but rather is confined to a specific location. They no longer claim that Alcyone is that location.

While Answering Jehovah’s Witnesses Subject by Subject is very useful in educating the reader about the matters it covers, most entries don’t explain how to show the Witnesses that the Watchtower is wrong about its doctrinal teachings. In fact, witnessing advice in an early chapter specifically recommends bypassing doctrinal discussions initially and focusing instead on the Watchtower’s unreliability as shown by its false prophecies, doctrinal flip-flops, and dishonesty.

Do you believe this book’s structure would be helpful to you in witnessing to Jehovah’s Witnesses? Do you agree with Reed that your first witnessing effort should be showing Witnesses the unreliability of the Watchtower organization?