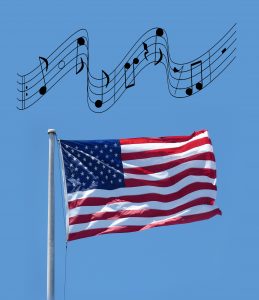 We saw last time that the Watchtower forbids Jehovah’s Witnesses from saluting the flag of any nation.

It also prohibits them from rising in response to the playing of the national anthem.

Let’s look at its reasons and see how to respond.

Objection 1: It is idolatry.

The Watchtower cites Daniel 3:4-5:”You are commanded, O peoples, nations, and languages, that when you hear the sound of the horn, pipe, lyre, trigon, harp, bagpipe, and every kind of music, you are to fall down and worship the golden image that King Nebuchadnezzar has set up…”

It states: “To impress the people with his majesty and religious ardor, this powerful monarch erected a great image and compelled his subjects to bow down to it while music, like an anthem, was being played. However, three Hebrews—Shadrach, Meshach, and Abednego—refused to bow to the image, even on pain of death” (God’s Love, 2008, p. 212).

Almost anything can be perverted. Point out to the Witnesses, however, that in the same article the Watchtower admits: “patriotic fervor often gives people a sense of unity and strength and may promote a spirit of cooperation and civic-mindedness among them.”

What’s wrong with prayer for divine guidance and protection? The Watchtower explains:

A national anthem is, in effect, a hymn or a prayer in behalf of a nation. It usually asks that the nation experience material prosperity and long duration. Should true Christians join in such prayerful sentiments?

The prophet Jeremiah lived among people who professed to serve God. Yet, Jehovah commanded him: “Do not pray in behalf of this people, neither raise in their behalf an entreating cry or a prayer nor beseech me, for I shall not be listening to you… Why was Jeremiah given this command? Because their society was permeated with stealing, murdering, the committing of adultery, false swearing, and idolatry.—Jeremiah 7:9” (same source, p. 22)

Surely, though, it was an extreme situation which led God to forbid Jeremiah from praying for the nation. It wasn’t a prohibition that applies in all circumstances. In 1 Timothy 2:1-2, Paul writes, “I urge, then, first of all, that requests, prayers, intercession and thanksgiving be made for everyone–for kings and all those in authority, that we may live peaceful and quiet lives in all godliness and holiness.”

The Watchtower argues as follows: “’The sentiments of national anthems vary… from prayers for the monarch to allusions to nationally important battles or uprisings . . . to expressions of patriotic feeling.’ [quoting the Encyclopedia Britannica]. But can those who seek to please God actually exult over the wars and revolutions of any nation?” (same source, page 22)

In response, you might point out that after Jehovah destroyed the Egyptian army in the Red Sea, Moses led the nation in a hymn of praise to God for their deliverance (Exodus 15).

The Watchtower sees this as contrary to God’s impartiality as expressed in Acts 17:26 (same source, p. 23).

Point out that the preceding verse declares, “From one man he [God] made every nation of men, that they should inhabit the whole earth; and he determined the times set for them and the exact places where they should live.”

Is it wrong, then, to thank him in song, as Moses did, when he delivers the nation through a war or revolution?

Matter of conscience or matter of rule?

The Watchtower states: “Because of their understanding of the Bible, many make a personal decision to refrain from participating in the flag salute and in the singing of patriotic songs” (same source, p. 23).

This statement makes it seem as if participation is a matter of individual conscience, but that’s not what the Watchtower teaches. Instead, it gives Jehovah’s Witnesses rules by which genuine Christians are to behave.

When national anthems are played, usually all a person has to do to show that he shares the sentiments of the song is to stand up. In such cases, Christians remain seated. If they are already standing when the national anthem is played, however, there is no need for them to take the special action of sitting down. It is not as though they had specifically chosen to stand for the anthem. On the other hand, if a group are expected to stand and sing, then merely standing up out of respect but not singing would not constitute sharing in the sentiments of the song (same source, p. 24).

Thus, there would seem to be three rules for Jehovah’s Witnesses regarding national anthems:

Have you ever discussed the national anthem with Jehovah’s Witnesses? Do you find my thoughts and suggestions helpful?

Jehovah’s Witnesses and the Flag

3 Comments on "Jehovah’s Witnesses and the National Anthem"

It is God’s Word that dictates what JWs can and cannot do. Some things are a matter of conscience based on what we understand from the studying and meditating on the scriptures. Thankfully we have an organization that helps in GUIDING us.

Guiding is one thing. Dictating behavior that goes beyond Bible requirements is quite another. Holding judicial committees if they don’t accept the “guidance” is even worse. Can we agree that the Bible says nothing about whether a person should stand when a national anthem is played?

Anonymous, the WT adds to the Bible. They are going above and beyond what is written. That is what Mr. Englund is trying to point out. Our consciences should be what helps us discern right from wrong but the WT makes the decision for you. If you do not agree with the WT, you are out! You said, “Thankfully we have an organization that helps in GUIDING us.” What about the Holy Spirit? Remember, in the WT study edition February 2017, the Governing Body admits they are not inspired. So, who is GUIDING YOU?